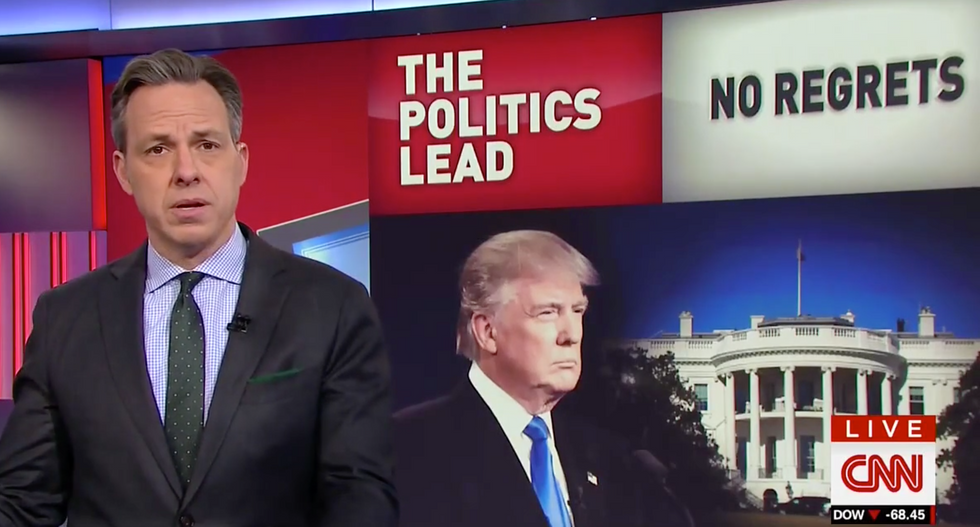 CNN’s Jake Tapper on Wednesday kicked off his eponymous show “The Lead” with a pointed dig at Donald Trump’s dubious claim that Barack Obama wiretapped Trump Tower during the 2016 presidential campaign.

Trump levied the startling allegation on Saturday, in a series of tweets charging Obama with “Nixon/Watergate”-style surveillance on his campaign headquarters. Trump has yet to provide any evidence to back up his claim, instead asking Congress to investigate his unfounded accusation.

Despite the president’s charge, Republican leaders refuse to back Trump up. On Tuesday, House Intelligence Chairman Devin Nunes (R-CA) declined to say whether he believes Obama tapped Trump Tower, instead complaining that “a lot of the things [Trump] says, [the press takes] literally,” when it apparently should not. Senate Intelligence Chairman Richard Burr (R-NC), who is leading the investigation into Russian interference in the 2016 election, similarly hedged when asked about Trump’s theory.

"We're going to go anywhere there is intelligence or facts that send us, so I'm not going to limit it one way or the other,” Burr told CNN. “But we don't have anything today that would send us in that direction, but that's not to say that we might not find something."

The lack of evidence and support for the bogus wiretap claim prompted Tapper on Wednesday to nail the president for his one-man conspiracy show.

“The White House saying the president has no regrets about his fact-free claim that then-President Obama tapped his phone last year, even though just about everyone else in the city in the know, or with the power to investigate the claim says it’s not true or that they’ve seen nothing that can support the accusation,” Tapper continued.

The CNN host then shredded Trump’s attempts to cobble together “nonexistent evidence” that would prove the claim the president has already asserted as “fact” instead of an outright lie, as it currently appears to be.