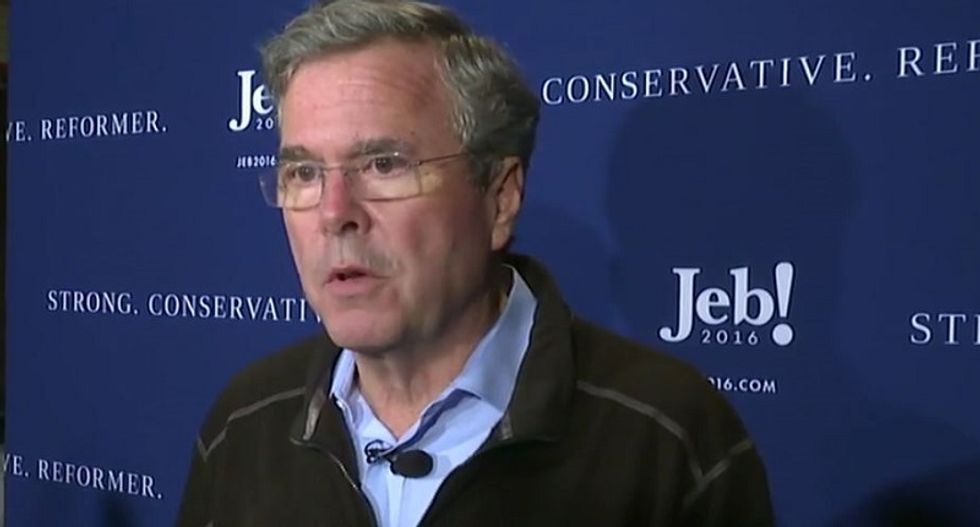 Former Florida Gov. Jeb Bush was brutally crushed by Donald Trump's bullying and name-calling during the 2016 election, but it hasn't stopped him from coming back for more.

In one of the first long interviews since the campaign, Bush told CBS Miami that he'd like to see Trump tone down the lies.

“He should stop saying things that aren’t true, that are distractions from the task at hand,” Bush said. "He hasn’t shifted to being president in the way that people are used to, and I think that’s the problem.”

Bush went on to call Trump "a distraction in and of himself" for his style of governing. “He’s got a lot of work to do, and some of these things — the wiretapping and all of this stuff — is a complete distraction that makes it harder to accomplish the things I know he wants to do.”

He continued, saying that it diminishes the office of the president when Trump behaves that way.

A conservative, Bush was pleased with many of Trump's picks for Cabinet secretaries like Education Sec. Betsy DeVos, Homeland Security Sec. John Kelly and Sec. of State Rex Tillerson.

Bush confessed that as a presidential candidate he lacked the personality and style to appeal to a broad electorate.

“Reasoning, in this environment where people are angry, is hard, and I wasn’t capable of giving them a sense that there is a better path,” he said. “They wanted to have their anger remediated — more than a five-point plan.... President Trump’s great skill was to understand that.”

He also learned “people customize their news to validate what they believe, and it makes them increasingly less tolerant of other people’s views that rely on another set of facts.” Bush went on to call the behavior "dangerous for our democracy.”

Watch the full interview below via CBS Miami: