Roger Stone panics over Russia investigators in letter to Jake Tapper: 'I will spank them like children' 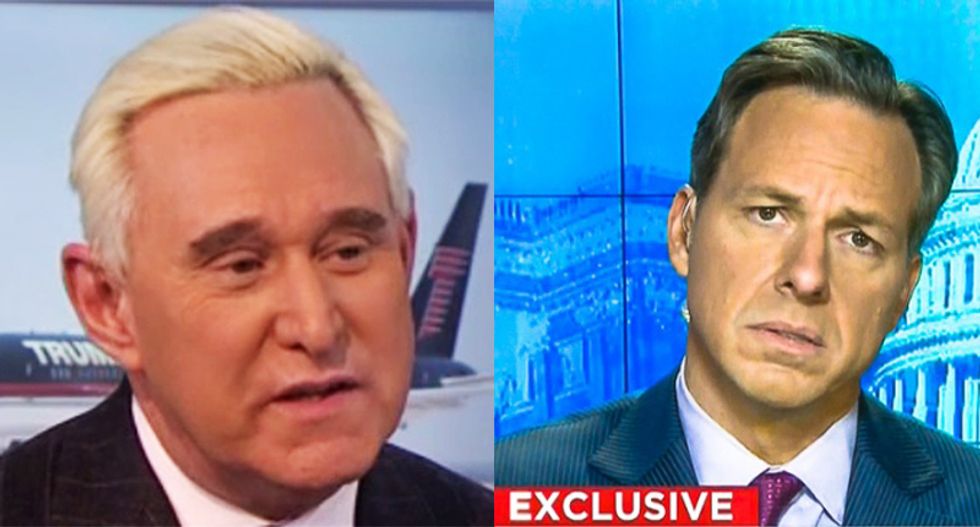 Roger Stone, a close friend and confidant to President Donald Trump, sent a letter to CNN host Jake Tapper to defend himself against allegations that he colluded with Russian operatives to damage Hillary Clinton's campaign.

In a report on Wednesday, CNN revealed that the FBI had learned that associates of the president appeared to have coordinated with Russians during the 2016 campaign.

And although the report did not explicitly accuse Stone of wrongdoing, Tapper said on Thursday that the Trump ally had sent CNN a letter to defend himself.

"Neither the president or I have anything to fear from a full and fair investigation of these bogus charges of Russian collusion," Stone insists. "But now Adam Schiff, having slimed me in public session seems to be backing away from the confrontation. I demand a right to face my accusers. I will deconstruct their lies and spank them like children."

The letter goes on to blast Rep. Eric Swalwell (D-CA), who he calls a "pretty boy" and a "first term mannequin", for suggesting that Stone's Twitter communications with Russian hacker Guccifer 2.0 were evidence of collusion.

"I am specifically accused of colluding with Guccifer 2.0 in the hacking and release of the DNC documents yet my only communications with him come over a month after Wikileaks had released said documents," Stone says. "Thus collusion would have been impossible unless I owned a time machine."

According to Stone, a Jan. 20 New York Times story about intercepted Russia communications is proof that he has been "unfairly monitored by the deep state."

"Monitoring of his phone calls actually began under Bush," the letter claims, "and continue under Obama ultimately becoming the bugging of Trump Tower both before and after election day."