Sean Spicer implodes at briefing: 'If the president puts Russian dressing on his salad it's a connection' 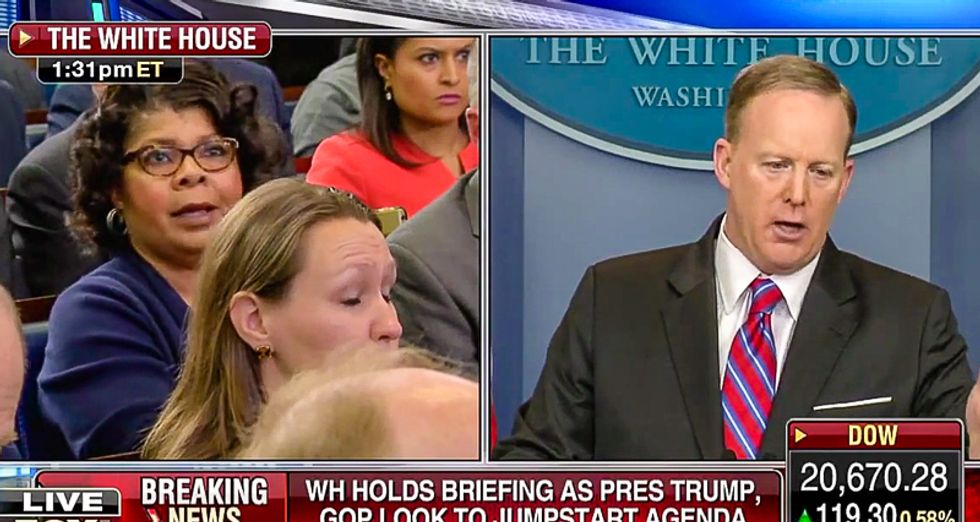 White House Press Secretary Sean Spicer snapped at reporters on Tuesday for pressing him about investigations into Russia's involvement in the 2016 U.S. election.

"How does this administration try to revamp its image?" she wondered. "Two and a half months in, you've got this [Sally Yates] story today, you've got other things going on. You've got Russia, you've got wiretaps..."

"No!" Spicer interrupted. "We don't have that!"

"You've got investigations on Capitol Hill," Ryan pointed out.

"I get it," Spicer replied. "I've said it from the day that I got here until whenever that there is no connection. You've got Russia! If the president puts Russian salad dressing on his salad tonight, somehow that's a Russian connection."

Ryan protested but Spicer continued: "I appreciate your agenda here but the reality is... at some point, report the facts! The facts are that every single person who has been briefed on this subject has come away with the same conclusion."

"I'm sorry that that disgusts you," he added. "You're shaking your head. I appreciate it but understand this, that at some point, the facts are what they are. And every single person who has been briefed on this situation with respect to the situation with Russia -- Republican, Democrat, Obama appointee, career [employees] -- have all come to the same conclusion. At some point, April, you're going to have to take no for an answer with respect to whether or not there was collusion."

Spicer went on to accuse Ryan of being "hell bent" on pursuing her own agenda.

Update: Ryan reacted in a tweet following the press conference.