Seth Meyers destroys Trump's healthcare fail: His deal-making skills 'turned out to be a complete sham' 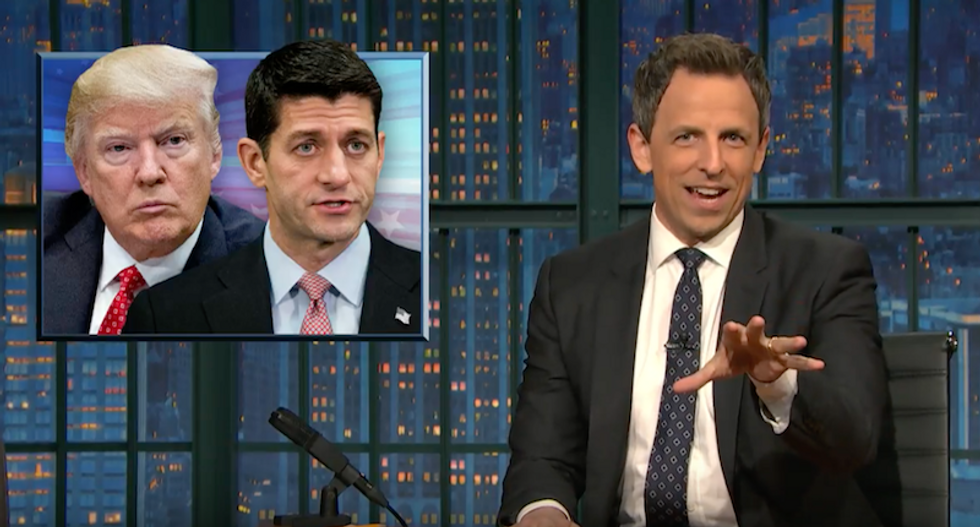 "Healthcare was the first test of Trump's supposed deal-making skills and it went up in flames so what is Trump's team saying now about his inability to get a deal done?" Meyers asked, reminding viewers that, despite Trump's claims that "Nobody knows the system better than me," he doesn't actually know the system at all.

Despite the blunder, Trump's team maintained that he had done everything he could to pass the bill. "That's right, Trump used every minute of every day to get this bill passed," Meyers said. "Like on Thursday, when Republicans were desperately trying to cobble enough votes and Trump was doing this." Meyers then showed videos of Trump's photo-op in a truck.

"So now that the deal-making skills Trump spent the entire campaign bragging about have turned out to be a complete sham, is the president at least willing to admit that he failed to deliver on a key campaign promise?" Meyers asked. "Of course not."

"Not only is Trump now trying to claim that he never promised to replace Obamacare quickly, he's trying to claim it wasn't even really his idea," Meyers noted. "In fact, Trump seems to be looking for literally anyone else to take the blame for the collapse of the healthcare bill he enthusiastically supported."

He added later, "Trump was more upset about [inauguration] crowd sizes than failing to deliver on one of his key campaign promises."