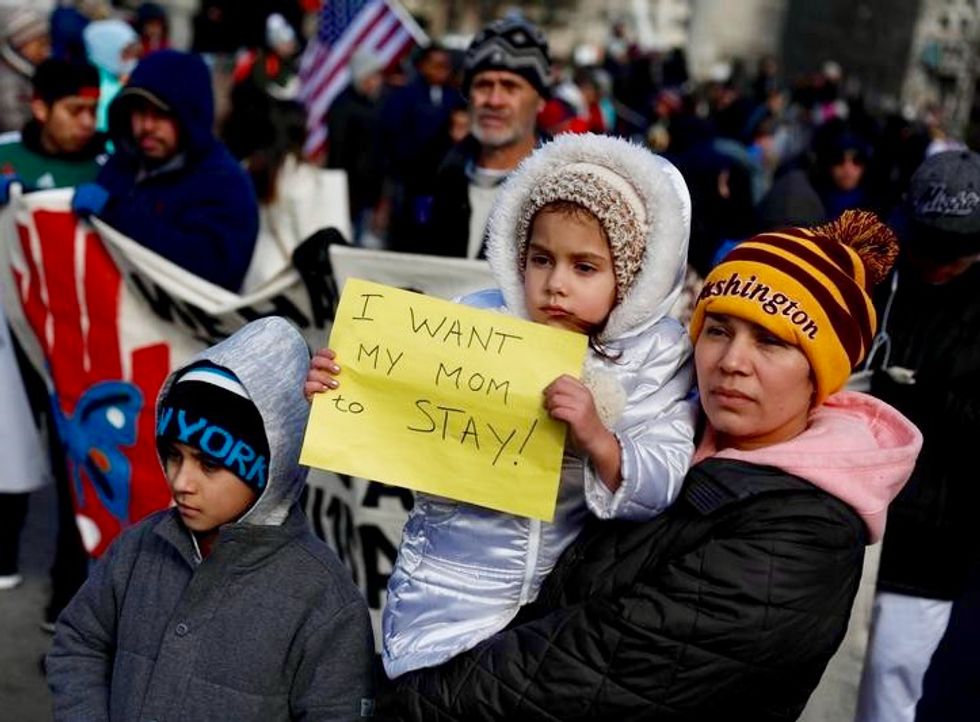 The migraines came out of nowhere. Nanci Palacios, who lives in Tampa, Florida, had headaches before but never with the intensity she’s currently experiencing. The back of her head throbs with pain. Her neck and shoulders become stiff. The migraines happen all the time now, Palacios said. She’s sluggish and less efficient.

Palacios also can’t sleep. She’s often anxious and her mind tends to race. At least four times a week, she’s up through the night. Often, she’s twisting and turning in bed. Palacios wears a Fitbit at night to track her sleeping patterns.

“There were periods where I was awake and I don’t remember being awake,” Palacios said. “I would wake up, and I was really tired.”

Her symptoms began the day after the presidential election in November. Palacios knew Trump presented a very real threat to her and her family. As immigrants, they have been in his crosshairs since he announced his candidacy.

Palacios is particularly concerned about her status as one of more than 750,000 recipients of Deferred Action for Childhood Arrivals, former President Barack Obama’s 2012 program that gave undocumented children renewable two-year work permits and relief from deportation. Trump has indicated that DACA is safe for now, but his escalating immigration enforcement tactics have contradicted that assurance. After all, Daniel Ramirez Medina was arrested and detained during an Immigration and Customs Enforcement raid on Feb. 10, even though he has the legal right to work and live in the United States under DACA. And on March 1, ICE agents arrested Daniela Vargas, who was in the process of renewing her DACA case, after she spoke out about her deportation fears at a news conference in Jackson, Mississippi.

For DACA recipients—commonly called “dreamers”—the future is uncertain. And that uncertainty has taken a toll on Palacios’ physical and mental health.

“It’s been something that’s on the back of my mind all the time,” said Palacios, who came to the United States from Guanajuato, Mexico, when she was 6 years old. “There’s moments where I break down, crying, because I don’t know what’s going to happen, and if it happens, [I wonder]: How am I going to move forward? How am I going to protect those around me?”

A study published last year in the Journal of Immigrant and Minority Health found that young immigrants who received DACA felt relief from increased access to services and opportunities, such as health care, work placement, and expanded support networks. If Palacios loses DACA, she could no longer work legally. If she gets fired, then she loses her health insurance. If she loses her health insurance, she can’t go to the doctor to treat the symptoms she’s experiencing. She won’t have the money to support herself or her family, including her younger siblings. Palacios, 28, said this scenario runs through her mind “every single day.” It causes her severe anxiety, which leads to the migraines and the sleepless nights.

The impact to her mental and physical health that Palacios experiences is common among immigrants. Research has shown that maltreatment, discrimination, detention, and anti-immigration legislation can lead to stress, headaches, body pains, irritability, depression, and emotional trauma. In January, the University of Michigan released a study showing that the trauma associated with immigration can be passed to infants: Babies born to Latina mothers within 37 weeks of a 2008 immigration raid in Iowa had a 24 percent greater risk of low birth weight and an increased risk of preterm birth.

“If you don’t know what’s going to happen from one day to the next, and you have no control over what’s going to happen—and that [it] may change the whole course of your life—you’re going to be at a high level of anxiety [and] all the symptoms that come with it,” said psychiatrist James Gordon, founder and director of The Center for Mind-Body Medicine in Washington, D.C.

Gordon said these symptoms are appropriate responses to the culture of fear and intimidation Trump and his administration has created. In the month since he’s taken office, Trump ordered a now-blocked travel ban targeting Muslim immigrants and broader deportation rules that have led to sweeping ICE raids across the country.

In response to these aggressive policies, immigrants and their allies have engaged in acts of resistance across the country. The National Education Association has created a Model Campus Safe Zones Resolution for K-12 schools to adopt to protect immigrant students. Over the past few months, students have held protests on college campuses to protest the potential dismantling of DACA. And a United We Dream petition asking Department of Homeland Security Secretary John Kelly to protect DACA is making its rounds online. Churches across the country are also providing sanctuary to undocumented immigrants.

These political actions help to advance the rights of immigrants, but addressing the crushing health issues triggered by Trump’s mass deportation policy takes something more intimate. Self-care, supportive interpersonal relationships, and peer-led counseling sessions have been key to addressing the issues faced by Palacios and other dreamers.

Faith in Florida, a faith-based community organizing group where Palacios works as an organizer, has started a campaign to create safe spaces for DACA recipients and other immigrants where they can discuss their problems, receive counseling, learn self-care practices, and receive services like massages. The interfaith group has partnered with local organizations in Tampa and throughout southeastern Florida to organize these gatherings, Palacios said.

“We’re mindful of the need [for] self-care,” she said. “We’ve really tried to rely on each other.”

Although she helps organize the sessions, Palacios said, she benefits from them as much as the people who attend. She also receives support from her colleagues at Faith in Florida and its umbrella organization, PICO National Network. Palacios said she receives calls and texts from work peers who want to check in on her well-being and remind her to take care of herself. She and her peers also spend time at the Faith in Florida office and during PICO retreats to talk about the fear and anxiety they’re shouldering.

“We are recognizing what this moment is creating for our people,” said Eddie Carmona, campaign manager of PICO’s LA RED campaign, which Palacios works on. “What we’re doing right now is making sure that everyone understands that you’re not by yourself,” he said.

Sometimes support doesn’t come from group gatherings, but from close relationships. Zahra Karim (name changed), a DACA recipient who came to the United States from Pakistan by way of Uganda, said she vents to her friends and fellow dreamers about the pain she feels over the uncertainty of DACA’s future. Karim works as a paralegal in New York City and wants to become a lawyer.

Since the election, Karim has experienced constant headaches, fatigue, appetite loss, and sleepless nights. She’s afraid that one day she will be rounded up in an ICE raid and disappear. She said the anxiety has led to two or three mental breakdowns.

Karim’s friends have helped her calm down and relax, she said. But Medina’s arrest exacerbated her symptoms.

“This is too much to handle,” said Karim. Sometimes she’ll retreat to the bathroom at work to cry. “I’m trying to be highly functional, [and] I am. But on the inside, it feels like I am slowly dying.”

While losing DACA would be devastating for Palacios, she said there are other recipients who have more to fear if Trump repeals the program. There are dreamers who have children to support and others at the legal clinic where Palacios works who are “literally putting their lives on hold” because they don’t know what will happen to DACA, she said.

Annamarya Scaccia wrote this article for YES! Magazine. Annamarya is an award-winning freelance journalist who reports on immigration, public health, disabilities, and civil liberties. Her work has appeared in the Austin Chronicle and New York Daily News, and at Texas Observer, Esquire, Rolling Stone, Paste, and Vice, among others. Like any native New Yorker, she drinks too much coffee and has strong opinions about the Yankees. She is now based in Austin, Texas.