'This is a lot of questions': Nunes fumbles as Blitzer grills him over clandestine White House visit 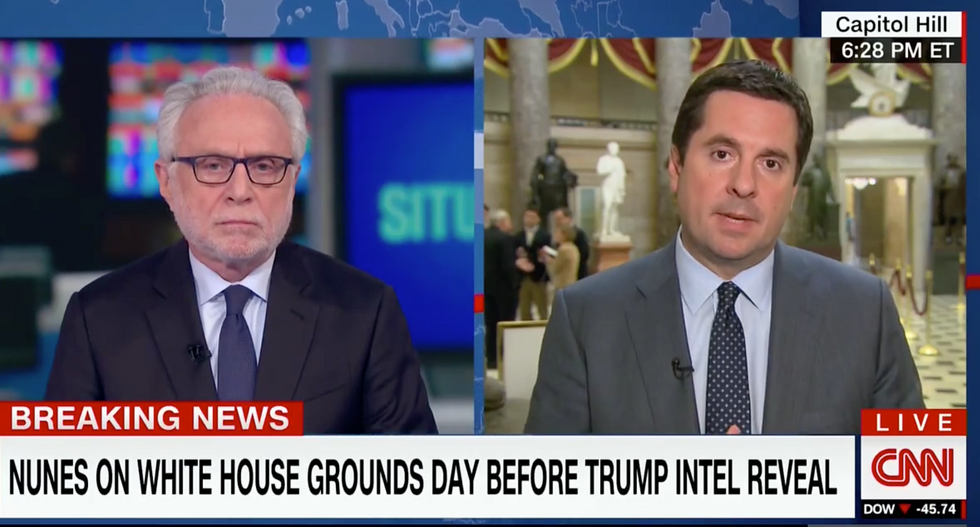 CNN’s Wolf Blitzer on Monday grilled House Intel Committee chairman Devin Nunes over reports he met an intelligence source on White House grounds the day before he informed Donald Trump that he and members of his transition team may have been “incidentally surveilled” by intelligence agencies.

Blitzer asked Nunes if he understands why it “might be conspicuous for the Chairman of the House Intelligence Committee to visit” the White House hours before unilaterally deciding to inform the president of potential intelligence gathered on Trump and members of his team.

Nunes argued there was nothing clandestine about meeting a source at the White House, adding, “if I wanted to, I could have snuck onto White House grounds at night when nobody would have seen me.”

Blitzer pressed Nunes on “who cleared [him] for admission” at the White House, arguing, “eventually these records, they’re going to come out anyhow.”

“Why not disclose it now if it’s going to be released in the near-future?” Blitzer asked. “You understand how all of this looks and why it’s causing such an uproar?”

Nunes argued the potential unmasking of additional names “bothered [him] enough for him to consider it “completely appropriate … to go to the president with this.”

At one point, Nunes grew exasperated by the magnitude of Blitzer’s question, complaining, “this is a lot of questions.”

“Do you understand why it might have been better to avoid this kind of meeting at the White House,” Blitzer asked again.

The CNN host also pressed Nunes about the president’s tweets alleging Obama had wiretapped him prior to the election.

“You don’t believe that, do you?” Blitzer asked, adding, “He should not feel vindicated?”