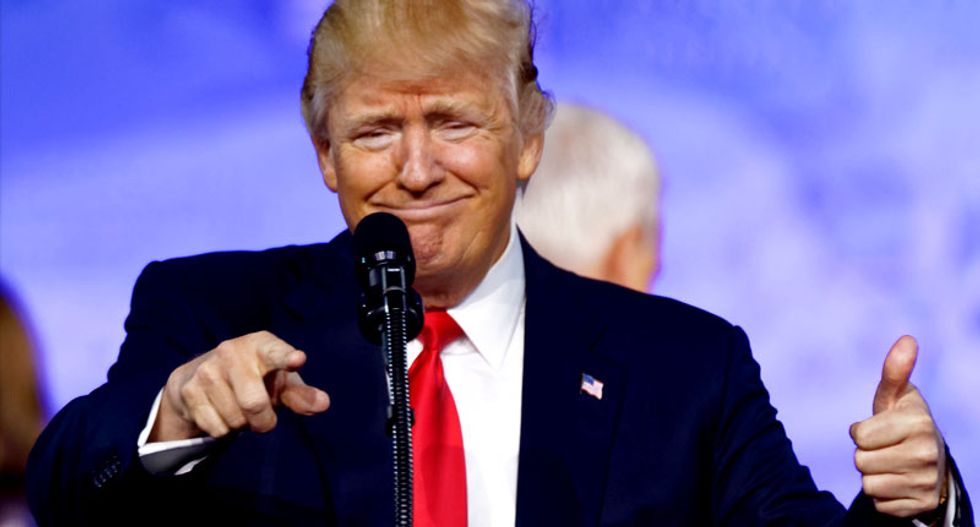 Assume for a moment, as many have suggested, that the whole Trump/Putin/Russia calamity is a deliberate distraction, a deflection to shift our gaze from the destruction of government and democratic principles that Trump, Bannon and their cohort — aided and abetted by a compliant Congress — seem intent on implementing.

What then to make of this weekend’s flurry of tweets from our commander-in-chief, first bellowing that Barack Obama wiretapped Trump Tower in Manhattan and then demanding a congressional investigation? A distraction from a distraction? Or worse?

CNN’s Jake Tapper succinctly summed it up in a Sunday morning tweet of his own:

It’s a classic authoritarian move: Make up a baseless charge and then demand that a loyal someone else — in this case the recumbent Republican Congress — prove it for you. But regardless of what they do or don’t find, you’ve successfully hurled your accusations into view and it will be hard to get them out of the public’s mind. Like Benghazi.

As of this writing, the latest major advance of the story came Sunday afternoon, when The New York Times broke the news that FBI Director James Comey “asked the Justice Department this weekend to publicly reject President Trump’s assertion that President Barack Obama ordered the tapping of Mr. Trump’s phones, senior American officials said on Sunday.”

In a separate editorial, the Times warned, “This is a dangerous moment, which requires Congress and members of this administration to look beyond partisan maneuvering and tend to the health of the democracy itself.” Dream on — as one of my Texas aunts used to say, wishing ain’t getting. The White House and congressional Republicans care about as much about the health of democracy as they do the health of the millions of poor and middle-class people who will be flattened by four years of craven social and economic policy. Just look at their new repeal-and-replace Obamacare plan.

Besides, Comey is wrong — we know this because the sycophantic Kellyanne Conway says so. Trump is the president of the United States, she proclaimed on Fox and Friends Monday morning, and because of that, “He has information and intelligence that the rest of us do not.” So there.

Down the rabbit hole we go, burrowing deeper and deeper through the twists and turns of Trump’s troubled mind. Why this latest blowup? As Karen Tumulty notes in The Washington Post, “When he wants to change a subject, he often does it by touching a match to the dry tinder of a sketchy conspiracy theory.” Or is this simply a mad flailing about from a president who realizes he’s in trouble not only over Russia but desperately in over his head about almost everything else too? For the most part, his promises are backed by nothing; he has no real solutions or legislative programs and hundreds of government positions needed to run the country remain unfilled.

(One highly notable, troubling exception: On Sunday, Eric Lipton and Binyamin Appelbaum of The Times reported on

“… More than 90 regulations that federal agencies and the Republican-controlled Congress have delayed, suspended or reversed in the month and a half since President Trump took office… one of the most significant shifts in regulatory policy in recent decades… In many cases, records show that the changes came after appeals by corporate lobbyists and trade association executives, who see a potentially historic opportunity to lower compliance costs and drive up profits.”)

When confronted, Trump’s childish answer always is to run off off to Twitter to change the subject or to blame someone else for his troubles, usually the intelligence community and “fake news,” but now it’s Barack Obama himself. Everybody’s out to get him, Trump thinks, conspiring to undermine and delegitimize his most amazing presidency ever.

If you’re really in the market for a reasonable conspiracy theory, how about this: By all accounts, Trump’s hyperventilated, weekend Twitter attacks on Obama were triggered not by actual evidence but by a Friday morning article on the Breitbart News website, which in turn was based, in part at least, on rantings the previous day from right-wing radio host Mark Levin. He contends that the Trump/Russia controversy and Attorney General Jeff Sessions’ recusal from any investigation of it are just smokescreens hiding nefarious acts by Obama meant to bring Trump down.

There’s really nothing new in the accusations that Trump’s predecessor and/or “the deep state” were out to get him via wiretaps or other forms of surveillance; they go back to at least last fall when an article by Louise Mensch appeared on the conservative Heat Street website (Heat Street is owned by Rupert Murdoch’s News Corp.) and subsequent internet pieces from The Guardian and the BBC. From these and other sources — including The New York Times and The Washington Post — seem to have come the Levin tirade and Breitbart News piece but in a form manipulated to create the most sinister insinuation possible.

At the Just Security website, based at New York University School of Law, Cato Institute senior fellow Julian Sanchez took a close look at the Heat Street, Guardian and BBC articles. He points out, “[T]here’s nothing here to suggest either the direct involvement of President Obama nor any clear indication of a violation of the law… it might behoove the commander in chief to refrain from issuing serious and inflammatory accusations based wholly on ‘intelligence’ gleaned from Breitbart News.”

Journalist Marcy Wheeler, an expert on national security and civil liberties, agrees. The prior reporting, which involves Russian banks, email and a spam marketing server — not the wiretapping of telephones, by the way — reflects a certain lack of knowledge of how law enforcement, intelligence agencies and the courts work, not to mention a lethal dose of sheer speculation. In a comprehensive, important review of the evidence at her EmptyWheel website, she writes:

“Trump hasn’t been bugged. It’s quite likely a number of Trump’s close associates are, after incriminating information showed up about or involving them on other wiretaps. There’s zero reason to believe Obama ordered them, not least because everyone involved believed Obama was responding too nonchalantly to the Russian accusations.

“Trump’s associates are bugged, to the extent one or more of them are directly targeted rather than being collected incidentally, because they’re suspected of being Russian assets.”

The Breitbart article, breathing heavily as it summarized Levin’s charges of a “silent” Obama coup, was written by Joel B. Pollak, the website’s senior editor-at-large and author of How Trump Won: The Inside Story of a Revolution. He worked with White House chief strategist Steve Bannon when Bannon ran Brietbart.

It’s fair to wonder: Did Bannon push Pollak and Breitbart to run the story — much as the Bush White House and Pentagon fed Judith Miller at The New York Times false accounts of Iraq’s “weapons of mass destruction,” then cited her reporting as proof that they were right?

Or did Bannon simply make sure Pollak’s Breitbart story was near the top of that well-known pile of printed out articles Trump looks at in the morning, count to 10 and wait for the presidential tantrum he was sure would erupt? Of all people, Bannon knows Trump has a track record of regurgitating fabricated nonsense that he hears and reads on right-wing media.

Speculation, of course. And a distraction, absolutely. Because there’s another deep state. It isn’t the corporate-government underground complex secretly running things but the deep, deep state of trouble we’re in.

That’s not just because of any skullduggery by Russia, although it’s clearer than ever that a special prosecutor or independent investigation is an absolute must. No, we’re being run straight off the cliff by a homegrown confederacy of dunces. And an intemperate, dangerous little child shall lead them.