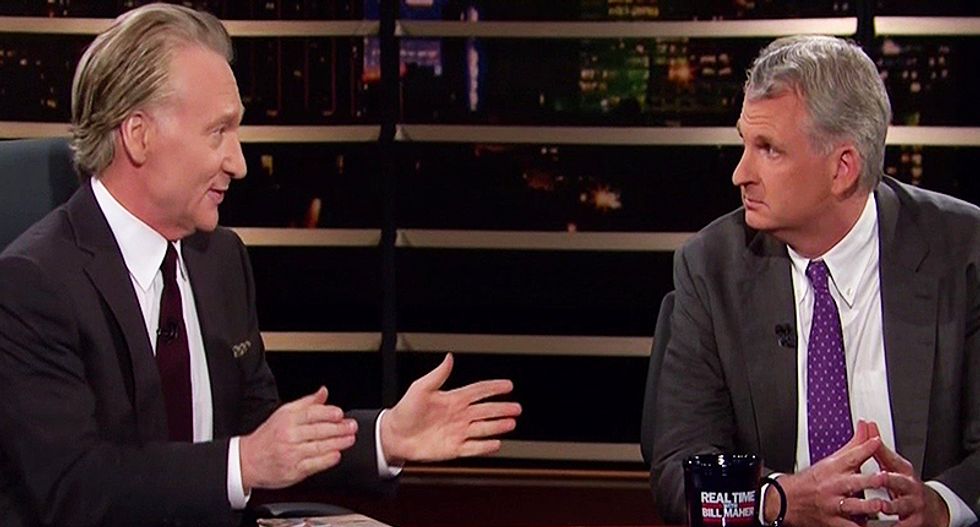 Yale History Professor Timothy Snyder's latest book On Tyranny: Twenty Lessons from the Twentieth Century outlines some of the things that fall under dictators as they rise to power. In a conversation Friday with Bill Maher, the host asked Snyder if this was his "busy season" given President Donald Trump's ties to Russia.

Maher asked Snyder to give the top three lessons from tyranny for which Americans should suit up.

"Don't obey in advance," was Snyder's first instruction. He doesn't necessarily mean obeying leaders or authority rather, "don't follow what everyone else is doing... figure out what you stand for and be yourself."

He then explained that the people who are looking for a post-factual world and distributing false information are directly responsible for killing democracy.

"It was the fascists who said, 'everyday life doesn't matter. Every detail doesn't matter. Facts don't matter. All that matters is the message, the leader, the myth, the totality,'" Snyder continued. "We should be thinking about the 1920s."

MSNBC's Chris Hayes noted that the World War II generation is dying off and with it the experience of why we are a global society and why we helped fight back fascism. Snyder explained that it came about in the late 1980s when the Berlin Wall came down and everyone decided it was a clean slate and facts didn't matter anymore.

"We then raised a generation without history," Snyder continued.

Screenwriter Max Brooks remarked that youth were also raised without the homework that goes along with being a member of the advanced citizenry that is America.

Investigative journalist Louise Mensch agreed, commenting that the 1920s also saw the rise of propaganda. "The modern day version of that is fake news and this country is under attack on its social networks for Russian-funded, Russian-pushed, propaganda that is uniquely tailored to each individual group."

Brooks explained that it is a specific form of "hybrid warfare" generated "to reclaim their lost empire." It's typical of the way the Russians operate.

Maher tied the conversation together with the news uncovered this week that former Trump campaign chair Paul Manafort was working for a Russian billionaire on things like media and advertising. He argued that it's treasonous to be employed by someone who is actively working against the Untied States and its interests.

"America First!" Mench exclaimed. "What would be hilarious about it if it wasn't actually happening to us in real life, but 'America First' is a Russian slogan! It's a Nazi slogan being pushed by Russia, who are quite literally attacking not only America but the whole of the west. Every country in Europe is undergoing these bots, this troll army, and what are we doing about it?"

Hayes raised the concern that many people think Trump himself is some sort of Russian spy, but the reality is that Trump was a mere tool used and manipulated into power.

"Their propaganda aims for the weaknesses the way a sniper aims for the lungs and head," Snyder explained. "So, they know us. They know how to work with us and they've done it very well. Donald Trump is American, right, but his advisors have worked with the Russians. His investors are Russian. His post-fact style is Russian and his whole idea of greatness is actually Russian. There are actually billboards up in Russia that say 'Let's make the world great together.'"