WATCH: Erin Burnett calls out Santorum's 'troubling' claim that Trump is 'oxygen in the lungs' of coal miners 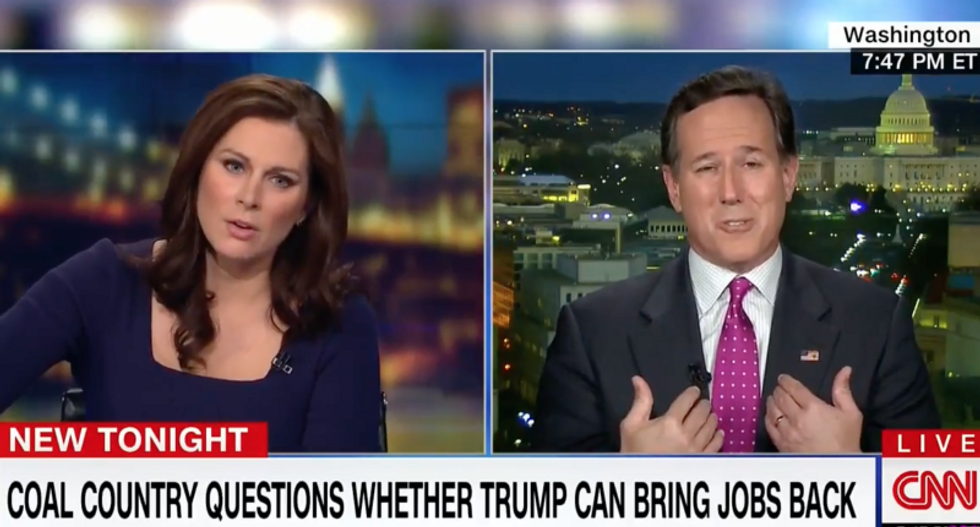 Rick Santorum on Wednesday made an uncomfortable comparison between Donald Trump’s approach to the coal industry and that of former president Barack Obama, telling CNN’s Erin Burnett the newly-minted president “a breath of oxygen into the lungs” of coal mining towns.

“This is a breath of oxygen into the lungs of small-town, rural communities in very depressed areas of the country,” Santorum said during a discussion on Trump’s latest executive order rolling back mining regulations.

“The analogy might have been slightly troubling, I think, to some that you just made—about lungs,” Burnett pointed out. But Santorum dug his heels in.

“You’re talking to a guy whose grandfather had black lung, so,” Santorum replied. “My grandfather was a coal miner, so I know all about this.”

“And it was, it was a deliberate analogy—to actually breathe some good air into this economy,” the 2012 presidential candidate continued. “Because the Obama administration basically suffocated this industry, basically took all the oxygen out of the mine. And with it went the miners.”