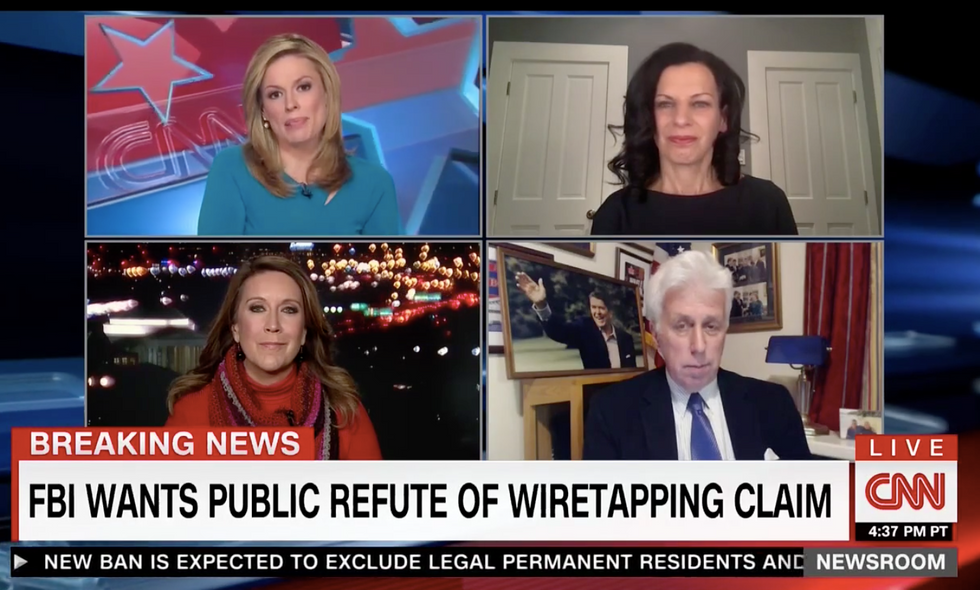 CNN anchor Pamela Brown kicked Pres. Donald Trump's spokesman Jeffrey Lord to the curb on Sunday in a panel discussion of Trump's wild accusations that former Pres. Barack Obama wiretapped the phones at Trump Tower in the weeks leading up to the 2016 election.

Security analyst Juliette Kayyem and political commentator Maria Cardona also joined the panel, which was on the air when news broke that FBI Director James Comey asked the Justice Department to publicly repudiate Pres. Trump's claims against Obama and clear the FBI's name.

Numerous officials in addition to Comey spoke out against Trump's accusations on Sunday, including former Director of National Intelligence under Pres. Obama James Clapper who spoke in uncharacteristically blunt language for an intelligence official in denying that any such wiretap program ever took place.

Brown asked Lord if Pres. Trump owes Obama an apology for the accusations, to which Lord responded that there is evidence of an investigation of Trump and his associates that was written about in the New York Times and the Washington Post.

Brown explained that those wiretaps were not of Trump aides, but of Russian Ambassador Sergey Kislyak that happened to snare a number of Trump associates who spoke with Kislyak.

"There's a big difference," Brown said. "We've got to deal with facts."

"Are you saying that the New York Times and the Washington Post aren't dealing with facts?" Lord asked.

"No, no, no," said Brown. "What the Washington Post and the New York Times reported is fundamentally different from the allegation that Pres. Trump made on Twitter yesterday."