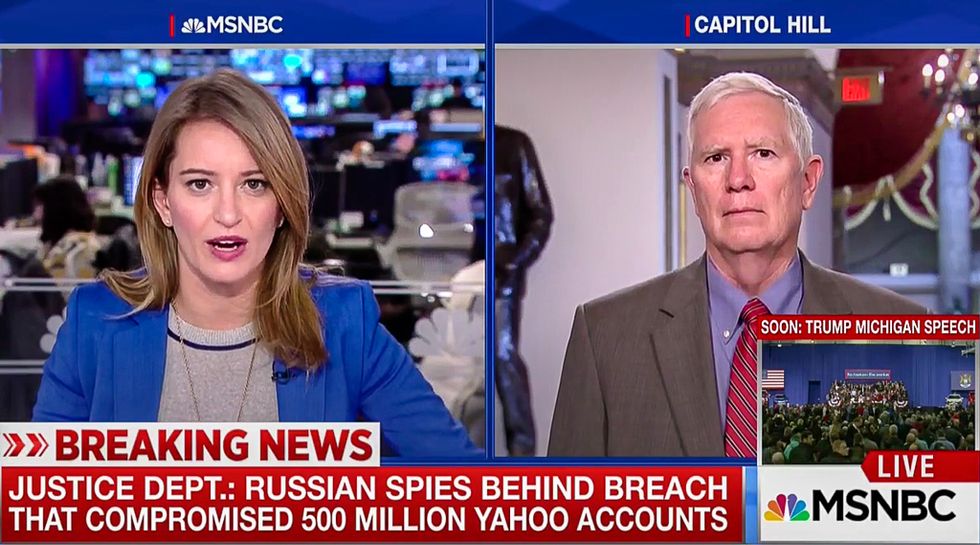 In an interview that aired on MSNBC, Tur asked Brooks if it was time for Trump to produce evidence of his claim that President Barack Obama wiretapped him during the 2016 presidential campaign.

"Does it frustrate you that time is being spent searching for evidence when the president says he has it?" Tur wondered. "Instead of getting things done like passing a health care bill or any of the rest of the Republican agenda?"

Brooks suggested that it was the media's fault for shifting "attention from some of these matters to the president's statement and to the wiretapping issue."

"But that's something y'all are doing, that is not something that is affecting what we are doing in the halls of Congress," he insisted.

"Are you saying it's the media fault that we're taking what the president says seriously?" Tur pressed.

Brooks charged that the media was focusing on the wiretapping charges "because it enhances your ratings, which in turn enhances your profit margins."

"You think it's ratings?" Tur shot back. "That's why we're talking about the president accusing another president or wiretapping him?"

The Alabama congressman complained that Tur had not spent enough time on an "important story" about the Federal Reserve raising its benchmark interest rate -- even though she had covered it minutes earlier.

"Congressman, we led our newscast with that so thank you for pointing that out," Tur replied calmly. "And secondly, there is a hearing underway on Capitol Hill talking about wiretapping and talking about information being searched or asked for by the FBI and from the DOJ. So, we are choosing to cover what is going on in Washington -- and that is what is going on in Washington."

"And my question to you is, because we are covering this, because that is what is going on in Washington, do you have a message to your president to say, 'Hey, if you're going to make an accusation, why not produce the evidence so that everybody's not running around searching for the evidence when you say you have it?" the MSNBC asked, repeating her earlier question.

Brooks agreed that it was "incumbent upon President Trump" to share "whatever information he has about the prior administration wiretapping him."

"What I am emphasizing is we in Congress can do many different things at the same time," Brooks said.

"And we in the news media can cover many different stories at the same time, which we are doing," Tur concluded.