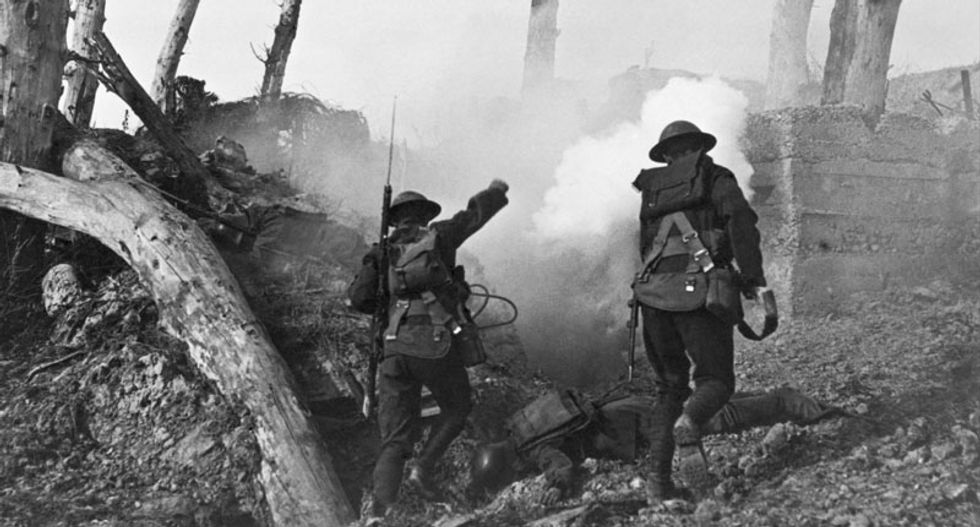 Two United States soldiers run past the remains of two German soldiers toward a bunker. (Wikimedia Commons/Library of Congress)

Much media notice is likely to be taken this spring of the fact that a hundred years ago the US declared war on Germany, initiating for the first time ever American participation in a military conflict on European soil. The unprecedented nature of this “great departure” will surely be commented upon. But it is unlikely that many observers will venture beyond what for a long time has been the standard explanation of that involvement. An opportunity for a clearer understanding of the emergence of the US as a world power in the twentieth century will thus be missed.

We are usually told that US involvement in the Great War can be explained quite simply. Perhaps not surprisingly the prevailing account fits into a broader, widely accepted and promoted narrative about the US role generally in the modern world. Foreign evils are the root of the matter, and they require that the “indispensable nation” make the world, safe, free, and democratic. In 1917, Germany, by its aggressive use of u-boats to blockade Britain and its allies, forced the US to abandon its neutrality. An idealistic president, Woodrow Wilson, responded by rallying Americans behind a crusade intended not only to punish Berlin, but to save the world from ever having to endure war again.

But this explanation is grossly inadequate. To understand what did happen, it helps to keep in mind that American leaders had come, by 1900, well before the war erupted in Europe in 1914, to hold decided views about their nation’s future role in the world. Inspired especially by the stupendous economic growth that America was experiencing, they believed that in the coming decades the US could ascend to a position of international importance comparable to, if not eclipsing, that played by Britain in the nineteenth century. At the same time they believed that the continuance of the kind of international order that London had presided over was vital to their success. They were alarmed by intensifying great power rivalry that might threaten that order and were especially anxious about changes to the political boundaries and commercial frameworks that prevailed throughout Latin America and East Asia. It was believed that both of those vast, underdeveloped regions would see the ascendance of US influence and trade. Out of this concern there emerged the two hallmark foreign policies of America in this period: the (revitalized) Monroe Doctrine and the Open Door Policy.

Great power relations increasingly seemed to require attention as well. While Britain was regarded as a rival, many of its policies were seen as working to US advantage. As a result, the two governments drew closer. And, Washington also began to work with London to promote mechanisms for the settlement of international disputes, war being seen as a threat to the status quo.

From beginning to end, the official US response to the Great War was dominated by the goal of trying to restore and then put on a more secure foundation the kind of international order American policy makers wanted. Ideologically, they assured themselves that this was a quest in the interest not only of all Americans, but of the entire world. The globe’s most unselfish and responsible statesmen were simply working to ensure that the world would be set up the way it was supposed to be, with (in their racialist thinking) the most adult and civilized people of humanity (themselves) leading the rest toward progress.

American involvement in the Great War began right away in 1914 when the war broke out. The Wilson administration wanted the conflict composed, but for the president and his chief adviser, Col. Edward M. House, peace was not an end in itself. It mattered greatly that Germany not undermine Britain and that it be taught a lesson. It was also vital that the settlement ensure against another such upheaval. Toward these ends, the US promoted itself as the only suitable mediator of the conflict and tried to position itself for a place at the peace table. Before the war even began the administration had already floated a rough plan for stabilization. The centerpiece of the plan entailed the US and like-minded big powers coming together to uphold the status quo against potential challengers like Russia and Japan, as well as cooperatively overseeing the future of what Col. House called the earth’s “waste places,” the underdeveloped world. This plan was in fact one of the precursors of Wilson’s League of Nations.

When the war began Wilson declared that the United States would steer a neutral path, and it was certainly his preference to stay clear of the fighting. But in the end his attachment to a particular vision for America’s role in the twentieth century world mattered more than peace. Whatever he said in public, he repeatedly tilted toward Britain and its allies, not only because he did not want them to lose, but also because he wanted to make sure that the US would have a leading role (along with Britain) in arranging the postwar world. Thus he acquiesced in Britain’s sweeping maritime measures, which involved the use of its navy and mines to destroy all of Germany’s trade. And House secretly offered to coordinate his peace efforts with London. The same considerations were key to the quite different posture that Wilson assumed toward Germany’s use of submarines. The president threatened war unless Berlin adhered to his views as to how it might behave on the high seas.

Wilson continued to try to get the two sides to accept his vision of a proper settlement. But both remained uncooperative. His hope of America becoming a world power without participation in the Great War’s fighting thus in actuality was made hostage to the question of how long Berlin would agree to respect Wilson’s red lines. That question would be answered in 1917, just months after he had won reelection as president behind the slogan “He Kept Us Out of War.”

Robert E. Hannigan is Scholar in Residence in the Department of History of Suffolk University. He is the author of The Great War and American Foreign Policy, 1914-24 (University of Pennsylvania Press, 2017).