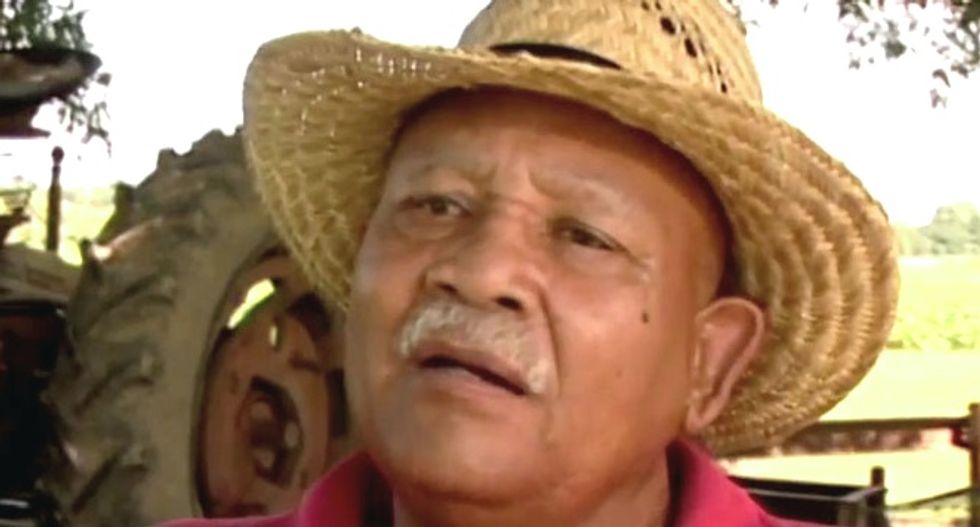 Like the episode on Mississippi of the classic film series Eyes on the Prize, the Television Academy-Award-winning Dirt and Deeds in Mississippi skillfully weaves together interviews with civil rights activists, archival film footage, and original historical research to portray the key period of civil rights history leading up to the Voting Rights Act of 1965. This history is worth recalling in the wake of the presidential election of 2016, in large part the result of decades of voter suppression which threatens to usher in a new period of Jim Crow.

Even in the wake of the civil rights victories of the 1960s, including representation of Blacks in county and state-level politics, the film’s setting of Holmes County remains one of the poorest counties in the United States, with more than half of households having incomes under $21,000 a year (approximately half the state median of $41,000 a year, itself the lowest of all 50 states). Holmes County, like most of the Delta region, voted overwhelmingly against Donald Trump in the 2016 election. But Mississippi remains a reliably Red state, where Republicans dominate the state government and hold both U.S. Senate seats and three of four of the state's seats in the U.S. House of Representatives.

The themes raised in Dirt and Deeds in Mississippi, in our view, have relevance both for interpretation of the centuries-long history of racial injustice and the resistance against it, and should offer a cautionary note for the critical next years of the 21st century. Both past and future need to pay attention to the successes or failures of specific organizations and institutions, and especially personal and family networks that cross-generational, geographic, racial, cultural, and other social boundaries. Hope for the future rests in large measure on the ability of oppressed communities to resist and survive.

This film, narrated by Danny Glover, is distinctive in several ways that make it a particularly valuable resource for researchers, students, and social justice activists alike. While touching on historic events that received national attention (Freedom Summer, the murders of civil rights activists Chaney, Goodman, and Schwerner; the 1964 Democratic Convention, and President Lyndon Johnson's legislative initiatives on civil rights), it focuses on the small rural community of Mileston, in Holmes County, on the edge of the Mississippi Delta just under 80 miles north of the state capital Jackson. The film makes good use of oral histories of local activists who seldom feature in the national narrative.

Dirt and Deeds highlights the critical roles of Black landowners as an indispensable support base for freedom and justice movements. In the 1960s, Black landowners provided housing for activists on their farms and armed defense for the organizers of non-violent demonstrations and voter registration drives. Unlike Blacks living on plantations or otherwise dependent on whites for paychecks, landowners had achieved some level of independence and proved willing and able to step up as leaders.

This film also reveals links to earlier history, including a little-known initiative of the New Deal, which established the Mileston farmers on good Delta land from a white plantation foreclosed at the height of the Great Depression. On the less fertile hill country on the eastern side of Holmes County, other farmers traced their land ownership back over a century. Robert Clark’s great-grandfather purchased the land from his former master, and in 1967, Clark became the first Black elected to the Mississippi legislature since Reconstruction. He served 36 years, retiring as Speaker of the Mississippi House.

One could add important side notes to the film. The interracial Southern Tenant Farmers Union (STFU) activated sharecroppers, tenants, and wage laborers in the 1930s and left important memories of struggle for the 1960s civil rights movement. The book by one of us (Michael Honey), Sharecropper's Troubadour, recounts the life and legacy of John L. Handcox, the STFU, and the African American song tradition, and helps us to understand how black and white together confronted racial terrorism and poverty in the Delta. The Delta Cooperative Farm in Bolivar County, Mississippi, grew out of the STFU. William Minter spent part of his childhood in Holmes County, living on the successor Providence Cooperative Farm just at the edge of the hill country, and his father provided medical care to its residents.

The STFU powerfully affected a generation of organizers in the Mississippi Delta. Rev. Ed King of the Student Nonviolent Coordinating Committee recalled that civil rights organizers of the 1960s drew inspiration from the STFU’s ability to pull together former KKK members and African Americans in Mississippi and Arkansas, who were among the poorest people in America at the time.

The life of John Handcox, born in 1904 near Brinkley, Arkansas, vividly illustrates themes raised in the film. He not only organized the STFU, but wrote some of its most memorable songs, including “Roll the Union On,” and helped to popularize “We Shall Not Be Moved” as a song that became an anthem in the civil rights movement and the Memphis sanitation strike of 1968. The Library of Congress through the work of Charles Seeger and others recorded Handcox’s songs in 1937, and they are readily available to today’s listeners through Smithsonian Folkways. The oral history of Handcox in Sharecropper's Troubadour documents that planter violence suppressed the struggle for justice and dignity for rural workers, but that movement’s songs and its legacy of interracial working-class organizing against impossible odds live on even today.

At the local level in Arkansas, where the STFU was strongest, activists like Carrie Dilworth spanned the generations, carrying her STFU experiences into her activist work with the NAACP in the 1950s and with SNCC in the 1960s. As much recent civil rights history documents, activists of the 1960s drew heavily on the experience of their elders in many rural counties in the South. Dirt and Deeds indelibly reminds us of the special importance of Black rural landowners to that process of movement building between generations.

The question remains, is this history relevant in analyzing today's Black freedom struggle and the continuing "whitelash" against it? Is it relevant in crafting strategies to build the foundation for a "Third Reconstruction" as proposed by Rev. Barber of North Carolina's "Moral Mondays?" Or will we continue the march backward analyzed by Philip Klinkner in his 1999 book on the Rise and Decline of Racial Inequality? Can the institutional positions and professional skills of those who participated in and benefited from the 1960s civil rights movement serve today's resistance, as did the assets of Black landowners in Mississippi in an earlier period? At a recent conference of the Southern Labor Studies Association held in Tampa, Florida, a panel reviewing Greta de Jong’s You Can’t Eat Freedom: Southerners and Social Justice after the Civil Rights Movement, asked just such questions.

Does the history portrayed through oral interviews and documentary sources in Dirt and Deeds have lessons for a predominantly urban United States in the age of Trump, at a time when the arrow of history seems to be pointing back to "Jim Crow" acted out on a national stage? Mississippi activist Kali Akuno's thoughts on the road ahead are worth pondering:

I do think in a moment like this, living in Mississippi is an advantage. Mississippi has been dominated by the Tea Party, even before the party had its name. Our governor, Phil Bryant, is a Tea Party member. We have a Republican supermajority and it has been that way for most of the last six years and they can pass almost anything they want. ...

We were like, "Welcome to Mississippi!" to the rest of the United States. We don't wish this on our worst enemies, but this is where we find ourselves. Crying about it or wishing it was different is not going to change the situation. We are going to have to get down, get dirty and struggle and work our way out of this."

William Minter (wminter@gmail.com) is the publisher and editor of AfricaFocus Bulletin and an independent scholar whose writing has focused on Africa, global issues, and U.S. foreign policy. His latest book, co-edited with Gail Hovey and Charles Cobb, Jr., is No Easy Victories: American Activists and African Liberation over a Half Century, 1950-2000. Michael Honey (mhoney@uw.edu) is a historian and Haley Professor of Humanities at University of Washington Tacoma, and a recent Guggenheim Fellow. Hiss recent work includes Sharecropper’s Troubadour: John L. Handcox, the Southern Tenant Farmers’ Union, and the African American Song Tradition, and the film, “Love and Solidarity: James Lawson and Nonviolence in the Search for Workers’ Rights.” This article was adapted from Poverty and Race, January-March, 2017, Poverty & Race Research Action Council (PRRAC).

Picture a member of congress and what do you see? He's a guy (those in question are usually still men, despite Marjorie Taylor Greene) with an ego the size of the Capitol dome itself, but a strangely fragile and insecure one. He'd run down his grandmother to get his mug on camera and tell the world his profound thoughts, but in private he can be strangely hollow and ignorant when the occasion doesn't call for prefabricated talking points. Imagine Ted Knight without the lovable charm.

That is a caricature, to be sure, but one that in many cases has become uncomfortably close to reality. The cause is not hard to find. For decades, large swathes of the American public have chosen to regard politics as a dirty business, and those who engage in it as scoundrels or buffoons. In so doing, they devalue the institutions that shape the civil society in which they live.