'All hat and no cattle': Joy Reid show hammers Sheriff Clarke for 'wearing uniform as a prop on Fox News' 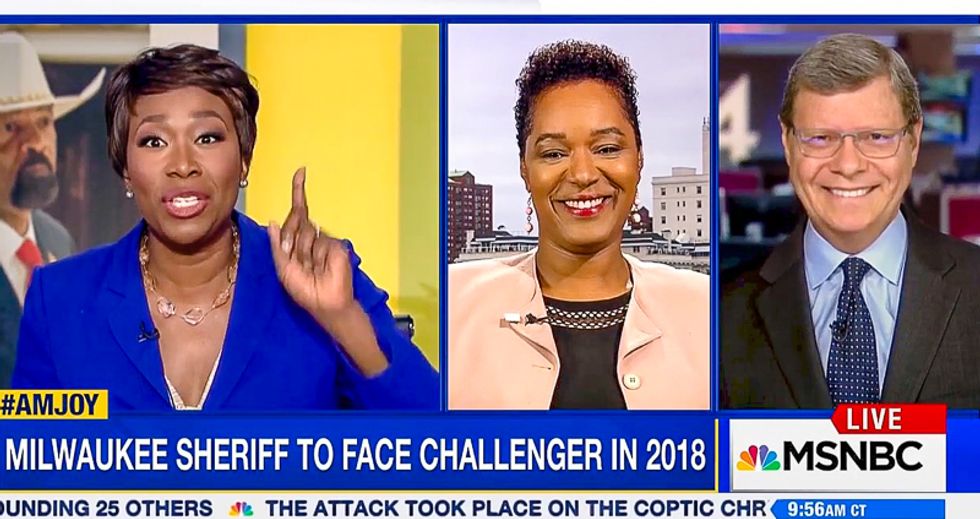 MSNBC host Joy Ann Reid and a panel of guests agreed on Sunday that Milwaukee Sheriff David Clarke, a vocal Donald Trump supporter, could likely lose his reelection bid because voters know that he's "all hat and no cattle."

Noting that Clarke currently has an approval rating of 31 percent, Reid wondered if the longtime sheriff would abandon his hopes for another term. But Wisconsin state Sen. Lena Taylor (D) argued that Clarke staying in the race would make it easier for a more progressive candidate to win.

"It's going to be such a fun primary seeing us make him lose for the first time," Taylor smiled. "I believe that with everything I have."

"I'm sure he would like to keep wearing that uniform as a prop when he goes on Fox News," conservative ex-radio host Charlie Sykes observed. "It's about the only time we ever see him around here. I mean, he is AWOL. He's basically bailed on Milwaukee."

Sykes predicted that Clarke would not run for reelection because "he thinks he is bigger than the sheriff's job.

"He's really transformed himself into this mini-Trump wannabe. And that's his career trajectory," he added.

Taylor accused Clarke of registering as a Democrat to "deceive voters."

"Everything he has done has been with the Republicans," she pointed out.

"Clearly the ego and the big hat have gotten the best of him," Sykes lamented.

"I'm so glad to hear that Charlie Sykes and I agree," Taylor laughed. "David Clarke is all hat and no cattle."

Watch the video below from MSNBC, broadcast April 9, 2017.