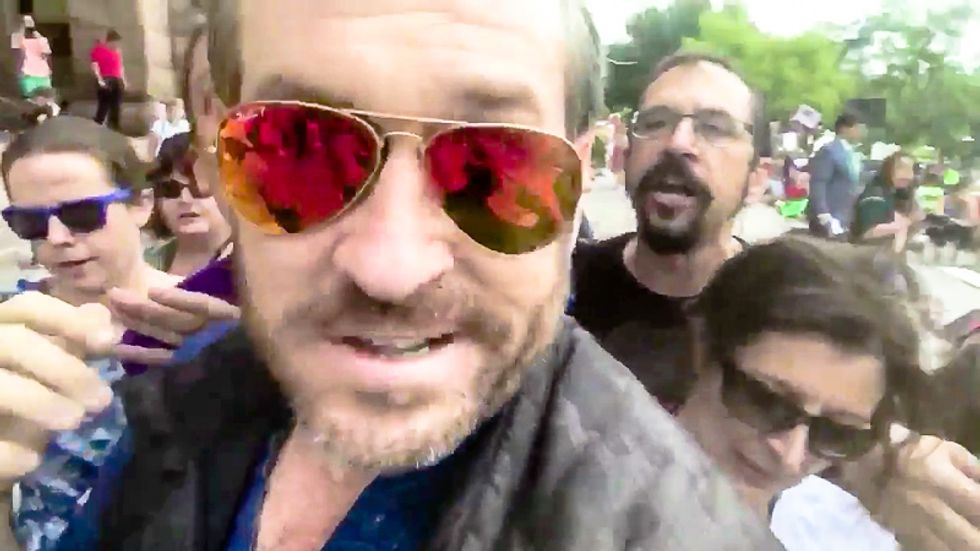 Mike Cernovich at an anti-Trump rally in Austin, Texas (Twitter)

Alt-right blogger Mike Cernovich was reportedly punched in the face while heckling protesters at demonstration against President Donald Trump over the weekend.

According to AOL News, Cernovich showed up on Saturday at tax day rally in Austin where protesters were calling on the president to release his taxes.

In video that was live streamed to Twitter by Cernovich, the alt-right blogger can be heard repeatedly yelling "Bill Clinton is a rapist."

The video shows a protester chanting "Show your taxes" before Cernovich begins to shout, "I'm being assaulted. I'm being pushed I'm under assault. I have a free speech right."

"Look at the hatred in their eyes and in their hearts," he yells.

A second video shows a man swinging his fist, which Cernovich claimed was a "shot" at him.

@Cernovich causing a scene claiming he got "assaulted". The Gorilla Mindset is so primitive. #TaxMarch… https://t.co/oRlvJuRq3y
— Mike Lewis (@Mike Lewis) 1492280998.0