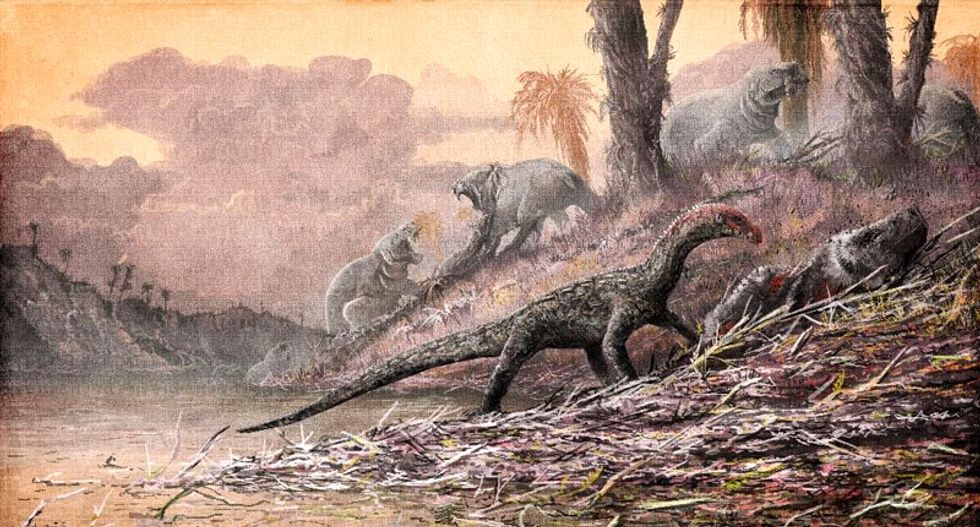 Fossils found in Tanzania have helped identify a missing link in dinosaur evolution, allowing the building up of the skeleton of the crocodile-like Teleocrater rhadinus (AFP Photo/Mark WITTON)

Fossils discovered in Tanzania in the 1930s have helped identify a "missing link" in dinosaur evolution that reveals their ancestors had long necks, walked on four legs and looked like crocodiles.

The 245-million-year-old fossils held in Britain's Natural History Museum were studied by palaeontologist Alan Charig in the 1950s.

But they were incomplete and it was only more fossils found in Tanzania in 2015 that helped build up the skeleton of "Teleocrator rhadinus".

"The finding forces a rethink of early dinosaur evolution," the journal Nature, where the research was published on Wednesday, said in a summary.

"The discovery of such an important new species is a once-in-a-lifetime experience," said Sterling Nesbitt, one of the authors and an assistant professor of geosciences at Virginia Tech in the US.

The international research project focuses on the evolution of a large group of reptiles called archosaurs into two branches: crocodiles and birds.

Dinosaurs evolved from the bird branch but the scientists found Teleocrators, which were already extinct by the time dinosaurs appeared, kept crocodile features and did not conform to a classic conception of early forms of dinosaur.

"Teleocrator has unexpectedly crocodile-like features that are causing us to completely reassess what we thought about the earliest stages of dinosaur evolution," said Ken Angielczyk, another author who is the associate curator of fossil mammals at the Field Museum of Natural History in Chicago.

"Scientists generally don't love the term 'missing link' but that's kind of what Teleocrater is: a missing link between dinosaurs and the common ancestor they share with crocodiles," he said.

Paul Barrett at the Natural History Museum said: "My colleague Alan Charig would have been thrilled to see one of 'his' animals finally being named and occupying such an interesting position in the Tree of Life.

"Our discovery shows the value of maintaining and re-assessing historical collections: many new discoveries, like this one, can be made by looking through museum collections with fresh eyes," he said.

Majority Leader Chuck Schumer will put the Respect for Marriage Act on the Senate floor late Monday afternoon. It is expected to pass, thanks to about a dozen Republicans who are expected to vote to protect, at least at the federal level, the marriages of same-sex and interracial couples.

Franklin Graham, who unlike his famous father has devoted a great deal of his time to attacking LGBTQ Americans, posted an ugly lie on Facebook to stir up his base of 10 million followers.