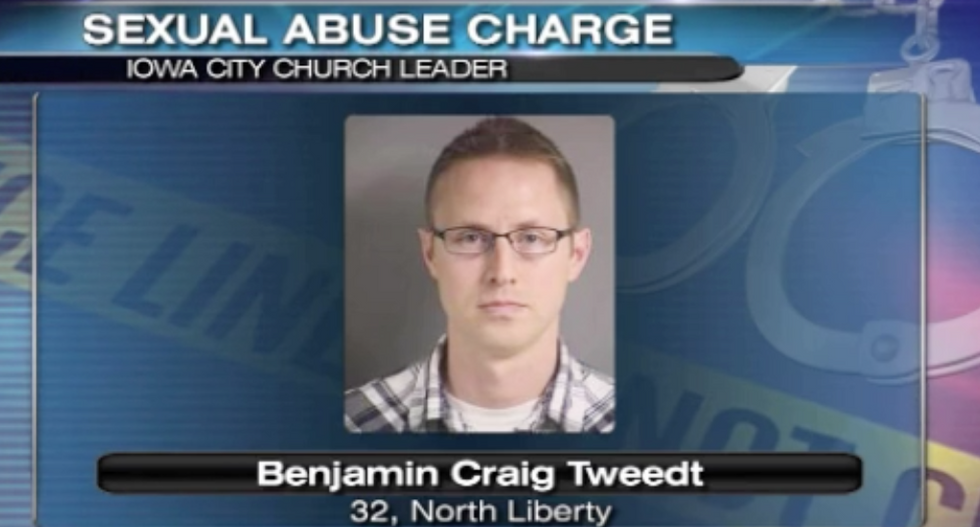 Benjamin Tweedt, who's also the author of a young adult book series, was indicted on one count of third-degree child abuse and two counts of lascivious acts with a child, among other charges after police allege he touched children inappropriately while serving as a youth leader in Iowa City.

Police told the Press-Citizen the majority of the abuse took place while Tweedt was at the church, during which time he “had multiple one-on-one visits with children.”

According to authorities, Tweedt would play a game that involved touching victims with his finger, beginning with their upper body. During one visit, Tweedt allegedly cuddles with a boy, who told police he could feel the youth leader’s erect penis.

In yet another incident, Tweedt made a child go into the bathroom with a ruler in order to measure his erect penis.

Authorities say there’s a possibility that more abuse took place, but noted Parkview Church staff were “forthcoming” with the investigation and encouraged their congregation to come forward and report any instances of abuse.

"In early February we were made aware of incidents that occurred involving a volunteer in the junior high ministries prior to 2012 and immediately contacted local authorities," the church said in a statement.

"Our desire is to see truth exposed, justice executed and compassion expressed to those who have been impacted," the church said.

Tweedt also served as a private school teacher at Heritage Christian School in North Liberty until 2013, when he was asked to resign after the school was made aware of his criminal conduct.

"All evidence that we had available to us — back in 2013 and presently available to us — shows no connection to the school or students, either present or former students at Heritage,” head administrator Mike Annis said. He added Tweedt’s conduct “did not meet the expectations that we hold for our employees."

Watch the newscast below, via KCRG-TV9: