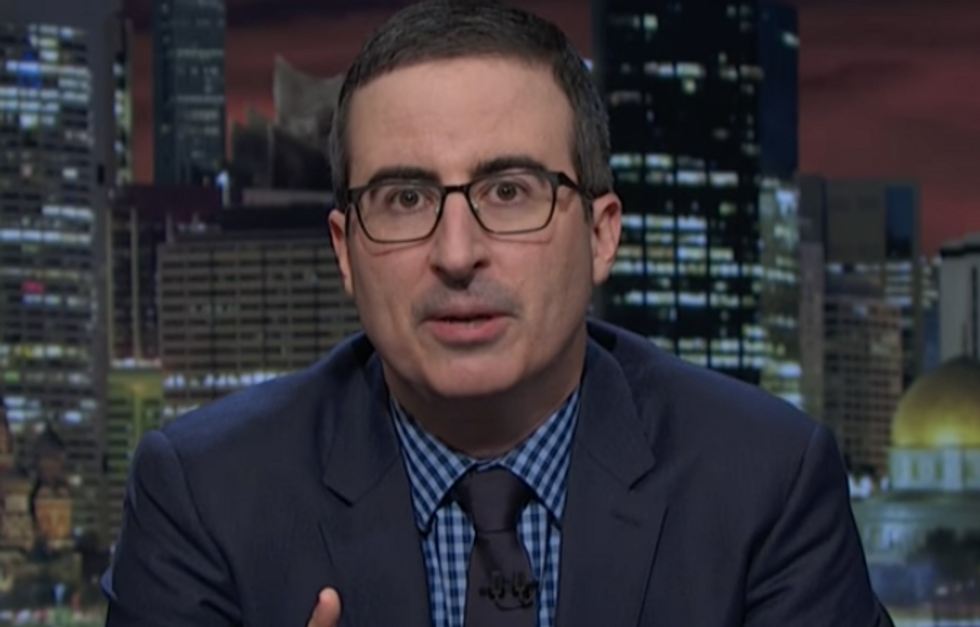 On this week's "Last Week Tonight," HBO's John Oliver ripped into President Donald Trump's bizarre flip-flops this week on foreign policy, but he reserved special scorn for the crew at "Fox and Friends" and their pie-eyed worship of Trump's reckless, potentially nuclear war-provoking actions.

Oliver poked fun at the fact that Trump remembered to slip "a commercial for Mar-a-Lago's chocolate cake" into his recollection of the night he fired Tomahawk missiles into Syria, but couldn't remember whether it was Iraq or Syria he was raiding.

The past week has been a whip-saw for Trump supporters, the host said, who saw Trump going back on his international isolationist promises of the campaign and showed signs of softening toward China.

For those voters, Oliver said, "It's like getting tickets for the 'Vagina Monologues,' but on the night you went it starred Brian Dennehy."

Oliver worried that the president seems to change his mind whenever he's presented with any information that he's not familiar with, which is a big deal because that's pretty much any and all information of any kind.

He then went to "Fox and Friends" and their reaction to the footage of the Massive Ordnance Air Blast (MOAB) bomb -- aka "The Mother of All Bombs" -- dropping.

Oliver took particular offense to the almost obscene glee that commentator Geraldo Rivera took in watching the black and white footage of the explosion, saying, "One of my favorite things" about his job at Fox News "is watching bombs fall on bad guys."

Oliver responded, that's funny, Geraldo, one of his favorite things about his job is getting to "look directly into the camera and say, 'F*ck you, Geraldo, I hope your mustache gets caught in a box fan.'"