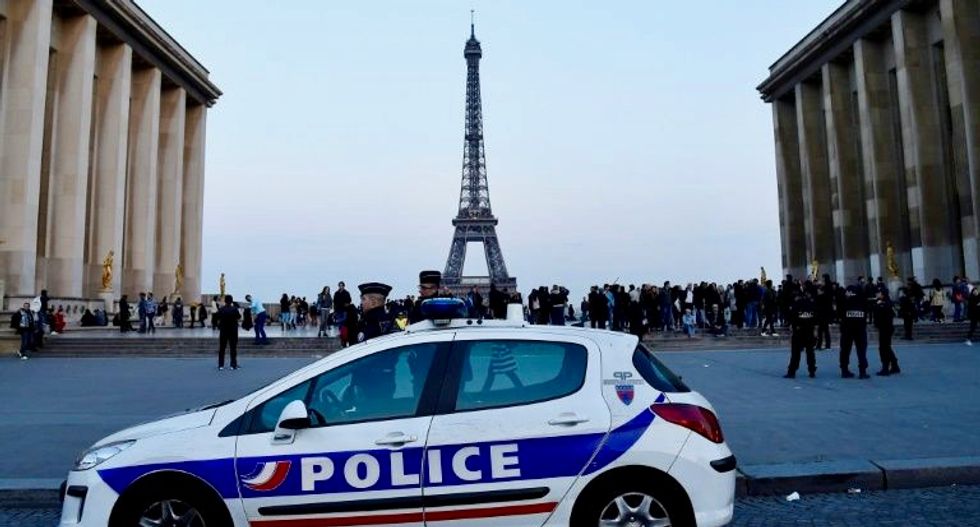 France was on edge Saturday on the eve of its most unpredictable presidential election in decades, which will take place under heightened security after the jihadist killing of a policeman.

The Islamic State-claimed slaying of the officer on Paris's Champs Elysees avenue thrust questions of security to the fore of campaigning after nine months of relative calm.

Nearly a quarter of voters are still undecided, and surveys showed until now the French to be more concerned about jobs and the economy than terrorism. But analysts warned Thursday's shooting could change that.

The top two vote getters in Sunday's tight, four-way contest will head to a run-off on May 7.

Authorities in Paris have offered additional guards for hundreds of polling stations in the capital, which will come on top of an already major security plan across the country.

"An extra guard or reinforcement of staff will be provided to any polling station that needs it," Paris town hall official Colombe Brossel said.

On Sunday, around 50,000 police and 7,000 soldiers will be deployed to protect voters around France.

Voters headed to the polls on Saturday in many of France's overseas territories like Martinique and Guadeloupe in the Caribbean, as well as in the US.

France was still shaken two days after 39-year-old gunman Karim Cheurfi shot dead a police officer and wounded two others before being killed, in an attack that sent tourists on the Champs Elysees rushing for cover.

Far-right leader Marine Le Pen moved quickly to present herself as the strongest defender against Islamist radicals in a country under a state of emergency since a string of terror attacks that began in 2015, which have killed more than 230 people.

The 48-year-old leader of the anti-immigration National Front (FN) called for France to "immediately" take back control of its borders from the European Union and deport all foreigners on a terror watchlist.

"This war against us is ceaseless and merciless," she said, accusing the Socialist government of a "cowardly" response to the threat.

Centrist Emmanuel Macron and conservative Francois Fillon also hastily convened televised briefings in which they vowed to protect the country.

"Some haven't taken the full measure of the evil," 63-year-old Fillon said, promising an "iron-fisted" approach.

Macron, a 39-year-old moderate whom Fillon has portrayed as too inexperienced for the top job, said France was paying for the intelligence jobs cuts made when Fillon was prime minister between 2007 and 2012.

Describing the Champs Elysees shooting as an attack on democracy, he urged voters: "Do not give in to fear."

Communist-backed firebrand Jean-Luc Melenchon, 65, was the only one of the four to stick to his schedule. He called for a "Europe of rebels", during a rally in Paris with Pablo Iglesias, the head of Spain's far-left Podemos party.

"Several Europes are possible, it doesn't have to be just their Europe," said Melenchon, a eurosceptic who has pledged to renegotiate treaties with the bloc.

A BVA poll conducted on Thursday and Friday showed Le Pen and Macron tied on 23 percent, ahead of Melenchon with 19.5 percent and Fillon on 19 percent.

Though the race has four main contenders, a total of 11 are in the running, most of whom are polling in single digits.

Police continued Saturday their probe as a clearer picture has emerged of Cheurfi's violent past.

He was arrested in February on suspicion of plotting to kill police officers but released because of a lack of evidence.

A serial offender, he spent nearly 14 years in prison for a range of crimes including attacks on the police. He had shown "no signs of radicalisation" while in custody, said France's anti-terrorism prosecutor Francois Molins.

The shooting came days after two men were arrested in Marseille on suspicion of planning an imminent attack and follows a series of deadly strikes around Europe in the past month, targeting Stockholm, London and the Saint Petersburg metro.

Prime Minister Bernard Cazeneuve accused Le Pen of attempting to make political hay out of the killing, saying she was "seeking, as she does after every tragedy, to take advantage of it".

Adelaide Zulfikarpasic of BVA pollsters said: "If it were to benefit someone that would clearly be Marine Le Pen who has dominated this issue throughout the campaign, or Francois Fillon."

US President Donald Trump tweeted that he thought the attack in Paris "will have a big effect" on the election.

Some voters, though undecided, were unmoved by the latest attack on French soil.

"I don't like any of them, they're all disappointing, said 73-year-old Ghislaine Pincont of Lille. "At worst, I'll cast a blank vote. In any case the attack on the Champs Elysees won't have any impact on my choice."

Public figures live on within the words they are remembered by. To understand the effect they had on history, their words need to be documented. No one is absolutely sure of exactly what Abraham Lincoln said in his most famous speech, the Gettysburg Address. Five known manuscripts exist, but all of them are slightly different. Every newspaper story from the day contains a different account.

In the case of modern presidents, for the official record, we rely upon transcriptions of all their speeches collected by the national government.