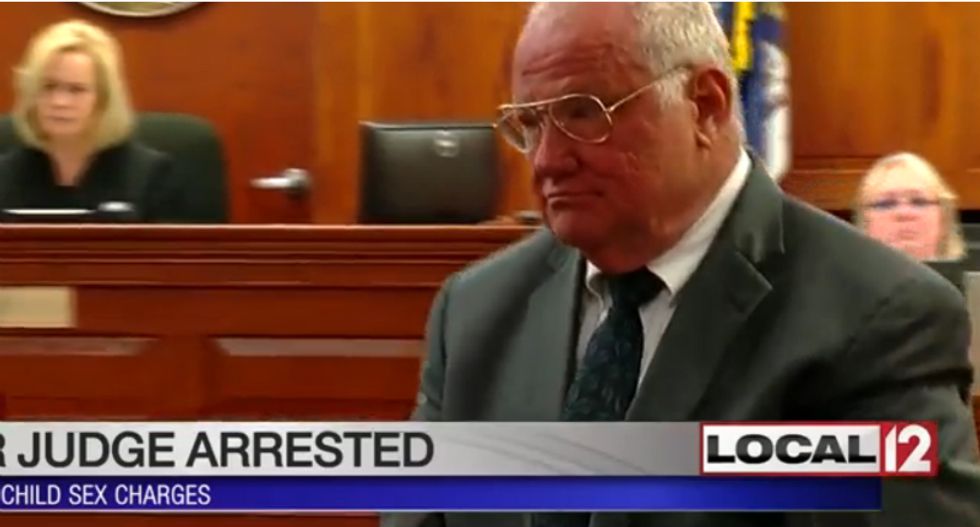 A former judge now serving as a school board member in suburban Cincinnati has been charged with felony human trafficking of a minor, felony inducing a minor to engage in sex and a third count of giving alcohol to a minor. The indictment was obtained by River City News publisher Michael Monks, who described Nolan as an, "outspoken and controversial" political figure.

Judge Tim Nolan of California, Kentucky represents District 5 on the Campbell County School Board. Yesterday afternoon he was lead into court wearing handcuffs as the "perp walk" was filmed by the local CBS station.

The sex trafficking allegedly occurred in August 2016 -- while Judge Nolan was serving as the chair of the Donald Trump campaign in Campbell County, KY. Trump beat Hillary Clinton 59% to 35% in the county while voters also elected Nolan.

In April of 2016, Nolan unsuccessfully attempted to remove Senate Majority Leader Mitch McConnell as a delegate to the RNC Convention. Between fighting Senator McConnell in April and the alleged crimes in August, Nolan was appointed by Governor Matt Bevin to the Kentucky Boxing and Wrestling Commission, but was removed only days later when a scandal erupted over a Ku Klux Klan photo posted to Nolan's Facebook.

Unlike Republican Governor Bevin, the Trump Campaign chose not to drop Judge Nolan after the KKK scandal.

The alleged sex crimes were investigated by Campbell County Police, but Nolan was arraigned in front of Judge Elizabeth Chandler in Boone County District Court as Campbell County Circuit Court Clerk Taunya Nolan Jack is the daughter of the defendant -- who served as a Campbell County Judge from 1978 to 1986.

Last November, Judge Nolan won a school board seat for a district with 5,000 students and 700 employees. Nolan beat an incumbent with 10 years of school board experience and 27 years experience as a teacher in the district by campaigning for so-called, "school choice vouchers" and for the elimination of all local property tax revenue for schools.

In announcing that the state's Special Prosecution Division would be handling the case, the office of Attorney General Andy Beshear stated that, "a core mission of Beshear's is to bring justice to the victims of rape, sexual assault and human trafficking."

Nolan is being tracked by a court mandated ankle monitor after being released on $50,000 bond. A preliminary hearing has been scheduled for May 5 in Boone District Court.

Watch the video below via WCPO: