John Oliver shreds Ivanka Trump and Jared Kushner: All they’re good at is not being Steve Bannon 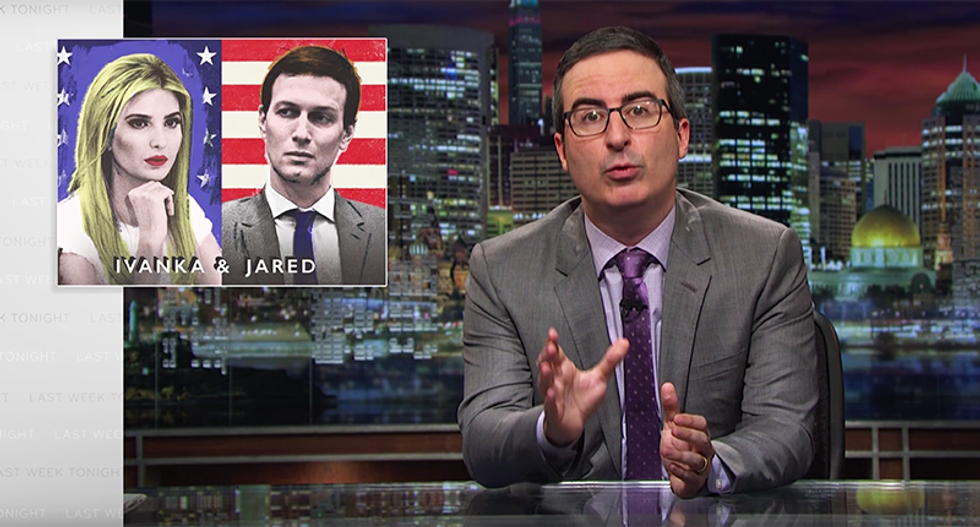 Ivanka Trump and Jared Kushner are now officially in the White House with offices and titled. However, John Oliver called out all three "Trumps" for the pre-inauguration claim by Ms. Trump that her role would be as "a daughter." The First Daughter is now assistant to the president and her husband is tasked with achieving Middle East peace, fixing the criminal justice system, serving as an informal chief of staff when the president is annoyed with Reince Priebus, stopping the opioid epidemic and fixing the Veterans Administration, to name a few.

“Is Ivanka really the moderating influence that people claim? And what in Jared’s background justifies such a gigantic White House portfolio?” Oliver wondered.

Somehow Ms. Trump has managed to say nothing and disagrees with her father on few issues while serving as his chief apologist. She manages to steer him more to the left, which “isn’t actually based on much” since he was nearly falling off the cliff of the right.

Oliver played a clip of Ms. Trump's interview with CBS News' Gayle King in which she swore, “My father agrees with me on so many issues, and where he doesn’t, he knows where I stand." Until she was asked for an example and claimed most her impact will be unknown over time.

"Well, that’s convenient!” Oliver shouted. “So we should just give her credit when good stuff happens, and blame others when bad stuff happens? That’s not a job description of a political adviser, that’s a description of an Old Testament God. And that answer there enables you to project whatever you want onto her based on secondhand rumors and assumptions.”

The interview with King adding the things she disagrees with her father on: Planned Parenthood and choice, global climate change and immigration. Yet, there's only one case of Ms. Trump having any impact on it -- a meeting with Cecil Richards, president of Planned Parenthood. Trump still reinstated the global gag rule, hired a climate denier to head the EPA and refuses to stop trying to pass a Muslim ban.

Ms. Trump spoke eloquently at the Republican National Convention about child care, yet nothing has happened on it, the president's plan wouldn't provide affordable child care to the families that need it and his budget ceases funding programs that help with child care.

The Tax Policy Center revealed the Trump child care plan has “very few benefits go to the lowest income families who are likely to struggle most with paying for child care” and “families with incomes between $10,000 and $30,000 would receive average annual benefits... of $10 [annually].”

Oliver noted that the only real way a parent could use $10 for child care is with a padlock.

"You may still like Ivanka—she can be appealing," Oliver continued. "And that’s frankly not by accident. She’s been trained in the art of Trump branding to be as vague and likable as possible so that everyone can plausibly think that she shares their values—whether or not that’s actually true. And if that sounds like a harsh thing for me to say about her, I will point out that she’s basically shared that message in one of her books.”

Ms. Trumps' 2009 book Trump Card: Playing to Win in Work and Life explained, “Perception is more important than reality. If someone perceives something to be true, it is more important than if it is in fact true. This doesn’t mean you should be duplicitous or deceitful, but don’t go out of your way to correct a false assumption if it plays to your advantage.”

Oliver concluded that Ms. Trump revealed any assumption about her will be untrustworthy.

“So, it is possible that she is doing nothing to moderate her father,” Oliver explained. “The truth is: We may all be thinking that Ivanka is doing a lot more than she actually is, although the same can emphatically not be said of her husband, Jared Kushner.”

When it came to Kushner, Oliver described him as a dimpled child of real estate with no credentials to handle the portfolio he's been assigned. His background reveals failures nearly as impressive as Trump's failures, like running his father's real estate empire into the ground while the old man was in jail for hiring a prostitute for his brother-in-law, filming it and using the tape to blackmail his sister.

Even Kushner's classmates in high school described Kushner as someone for whom his GPA and SAT score wouldn't be enough to get him into Harvard. Yet, he made it, perhaps due to his father's $2.5 million donation. The only skill Kushner seems to bring to the table is as a good listener who keeps his mouth shut, he's not Steve Bannon and he doesn't fly off the handle like the president does.

“If they are the reason you are sleeping at night, you should probably still be awake,” Oliver closed.