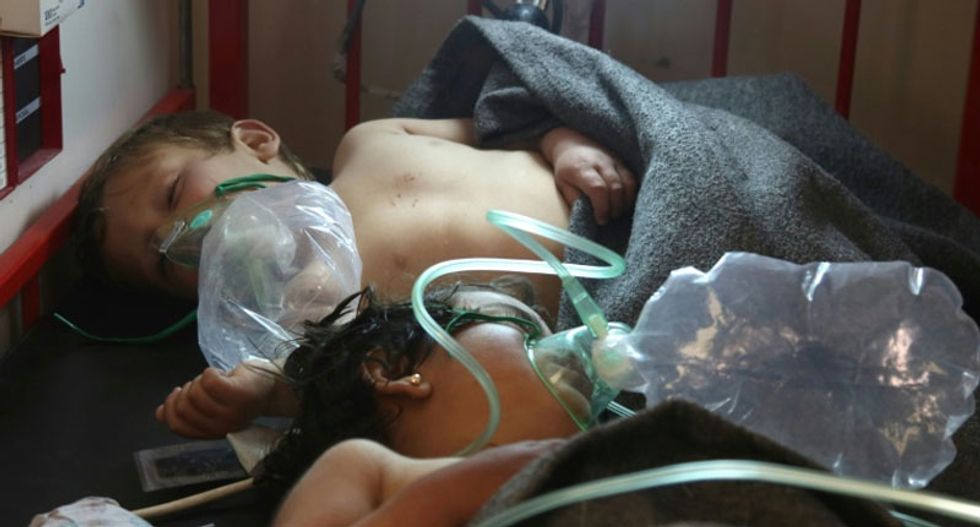 Russia stood by its ally Damascus on Wednesday ahead of a UN Security Council meeting to address accusations the Syrian government launched a chemical weapons attack that killed scores of civilians.

At least 72 people, among them 20 children, were killed in Tuesday's attack in rebel-held Khan Sheikhun, and dozens more were left gasping for air, convulsing, and foaming at the mouth, doctors said.

The World Health Organization said there was reason to suspect a chemical attack, with some victims displaying symptoms suggesting exposure to "a category of chemicals that includes nerve agents."

Britain, France and the United States have circulated a draft Security Council resolution demanding a swift investigation, after pointing the finger at President Bashar al-Assad's government for the attack.

But Moscow, which launched a military intervention in 2015 in support of Assad's forces, said the deaths were caused when a Syrian air strike hit a "terrorist warehouse" used for making bombs containing "toxic substances".

It also said it would continue its military campaign in support of government forces.

Syria's army has denied any use of chemical weapons, saying it "has never used them, any time, anywhere, and will not do so in the future."

But its denials have done little to quiet international condemnation, with UN chief Antonio Guterres on Wednesday saying the "horrific events" showed that "war crimes are going on in Syria".

Pope Francis said he was "horrified" by the "unacceptable massacre... where dozens of defenseless people, including many children, were killed."

Others blamed Damascus more directly for the attack, including British Foreign Secretary Boris Johnson, who said "all the evidence I have seen suggests this was the Assad regime."

EU president Donald Tusk said Assad's government bore "primary responsibility for the atrocities," adding "all those who support the regime share the moral and political responsibility."

Washington also accused Assad's government of responsibility, but drew criticism from Syria's opposition, which said an apparent softening of the US line on the embattled leader had emboldened him.

Iran, another key Assad ally, condemned "all use of chemical weapons" in Syria, but suggested the blame for the attack may lie with "terrorist groups".

If confirmed, the attack would be among the worst incidents of chemical weapons use in Syria's brutal civil war, which has killed over 320,000 people since it began in March 2011.

It unfolded in the early hours of Tuesday morning, with airplanes carrying out strikes that released "toxic gas" on Khan Sheikhun, in the northwestern province of Idlib, according to witnesses and a monitoring group.

The Syrian Observatory for Human Rights, a Britain-based monitor, said at least 160 people suffered the effects of the gas, with medical sources reporting incidents of vomiting, fainting, breathing problems and foaming at the mouth.

The WHO said some victims of the attack showed symptoms "consistent with exposure to organophosphorus chemicals, a category of chemicals that includes nerve agents."

Medics worked frantically in the hours after the attack to treat a steady stream of patients, administering oxygen and hosing down victims to wash off chemical residue.

Air strikes hit Khan Sheikhun again on Wednesday morning, the Observatory said. There were no immediate details on a toll.

Idlib province is controlled mostly by an alliance of rebel and jihadist groups, including the former Al-Qaeda affiliate known as Fateh al-Sham Front.

Syria officially relinquished its chemical arsenal and signed the Chemical Weapons Convention in 2013, to avert military action after it was accused of an attack outside Damascus that killed hundreds.

But there have been repeated allegations of chemical weapons use since, with a UN-led investigation pointing the finger at the regime for at least three chlorine attacks in 2014 and 2015.

The Organisation for the Prohibition of Chemical Weapons (OPCW) said it was "seriously concerned" by reports of Tuesday's attack.

The resolution proposed by Britain, France and the United States calls for the OPCW to quickly report findings on the attack, and demands Syria provide flight plans, flight logs and other information on its military operations on the day of the assault.

But it was unclear if Russia would veto the measure, as it has often done with previous Security Council resolutions concerning Syria.

Successive rounds of peace talks aimed at ending the ongoing civil war have failed to produce results, and Syria's opposition warned Tuesday that the attack cast doubt on the prospects for future negotiations.

Donor nations were meanwhile meeting for a second day in Brussels at a conference hosted by the European Union and United Nations to raise new funds for Syrian refugees, whose number now tops five million.

Over half Syria's population has been displaced internally and abroad since the conflict began, with regional neighbours hosting most of those who have become refugees.