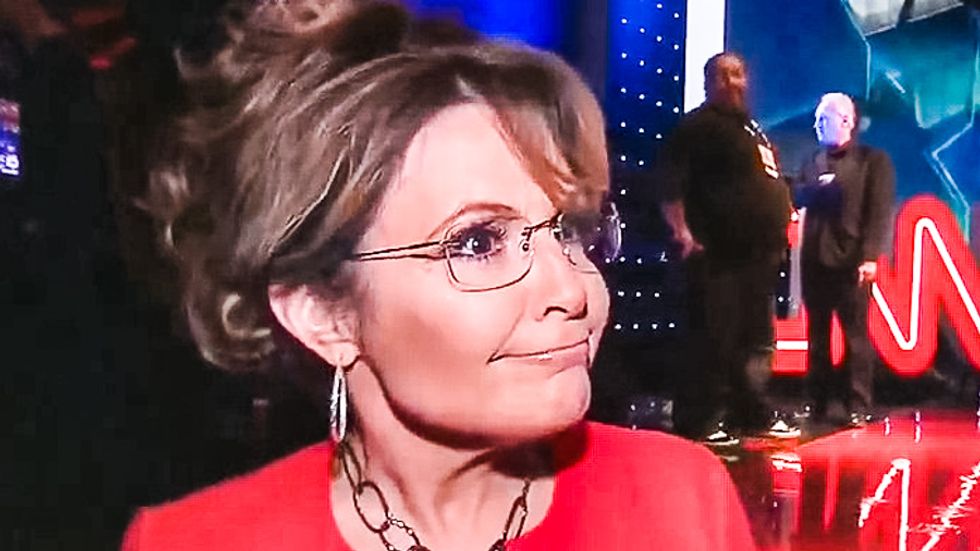 In an exclusive interview with CNN's Jake Tapper, former Gov. Sarah Palin (R-AK) revealed she believed that Russia was stealing oil from the United States and hinted that she might have experienced harassment at Fox News.

In a Thursday interview, Palin explained that the reason she brought Kid Rock and Ted Nugent to dinner with President Donald Trump Wednesday night because "Jesus was booked."

When it came to Russia, Palin said that Americans should always be alarmed when we hear Russia is doing something off the coast of Alaska.

"One thing we really need to be cognizant of -- and this has always bugged me that people have not appreciated Alaska's strategic location on the globe and how important we are when it comes to playing our part to secure our union with our location and resources," Palin said. "People don't understand that Russia has for years been physically, literally flagging undersea plots of land with resources, claiming resources that are actually belonging to the U.S., they're accessing resources under seas, the minerals, oil, gas reserves. Well, Russia has been aggressive in flagging those, claiming those. Under the Obama administration, we never fought back. We never said, 'hey, get out of our territory, those are ours.' So, now, I think with the issue coming to light of how close Russia is to Alaska, to our resources and what they're doing to try to intimidate, to try to send a message to America and to literally be trying to claim some of our resources, I think people will now become more aware and start demanding of this administration to not literally, but start fighting back and claiming what is ours."

Palin was famously mocked by "Saturday Night Live's" Tina Fey for her comments about Russia's proximity to Alaska. "I can see Russia from my house!" Fey said as Palin.

When asked about the cases of sexual harassment at Fox News, Palin said that she "use to be with Fox News" and emphasized, "I used to be with Fox." She revealed that the "corporate culture needs to change" at the network. But also took a shot at former female anchors who have complained after the fact.

"Women don't deserve -- they should not ever have to put up with any kind of intimidating workspace," Palin said. "At the same time if a woman believes that she is being intimidated and harassed, she needs to stand up and do something about it, not stick around for a paycheck for years and years and years, and then after the fact complain about what she went through."

Tapper asked Palin if she ever experienced any harassment while working at Fox News and she wouldn't answer, saying only that he can ask Fox News why her contract wasn't renewed. Palin did say that she wouldn't accept any form of harassment and would absolutely speak up if it occurred.

"I just -- you know, it was just time to part ways and, and, you know, get -- get out there in, I guess, a more diverse arena to express views," Palin concluded.