'SHUT UP!': Watch Bill O'Reilly lose it when Al Franken exposes him as a liar during vintage segment 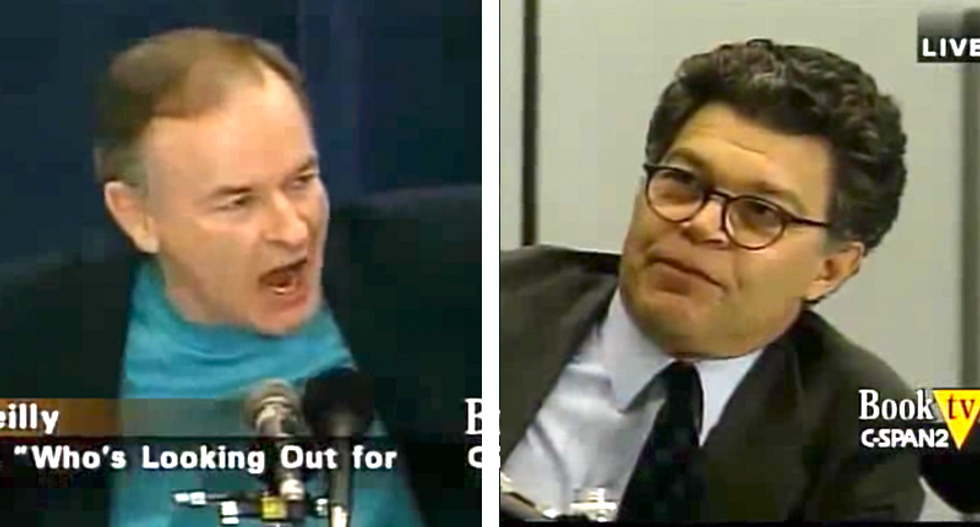 Before he was a U.S. Senator, Al Franken was the author of Lies and the Lying Liars Who Tell Them: A Fair and Balanced Look at the Right, a satirical book that excoriated conservative media.

In 2003, he faced off with one of the subjects of his book, the infamous Bill O’Reilly, during a panel discussion at the author event BookExpo. O’Reilly and Franken both spoke on the panel, beginning with the Fox News host, who promised he doesn’t “call anybody a liar” and doesn’t lie himself—as evidenced by the fact that his show doesn’t retract things.

“If I’m going to be accused of being a liar, you better have something there,” O’Reilly said to Franken before the future senator spoke.

And speak he did. Franken delivered a brutal smackdown of O’Reilly, describing a time the Fox News host claimed he won a Peabody award (an objectively false statement), and, when called out for lying, claimed he’d never said it in the first place.

“Guy says about me a couple weeks ago, ‘O’Reilly said he won a Peabody award,” Franken recalled O’Reilly saying. “Never said it.”

“See this is why you don’t retract things, you just continuously lie,” Franken joked. “I could go on all day," he later quipped.

“I know you could,” O’Reilly cooly replied. “You just about have.”

“We’re supposed to be on here for 15 minutes, this idiot goes on for 35,” O’Reilly continued (Franken spoke for under ten minutes). “All he’s got in six-and-a-half years is that I misspoke, that I labelled a Polk Award a Peabody. He writes it in his book, he tries to make me out to be a liar.”

“This isn’t your show Bill!” Franken shot back.

“This guys accuses me of being a liar, ladies and gentlemen … because I misspoke and called a Peabody a Polk,” O’Reilly repeated. “This is what this guy does. He demonizes it and then other people pick it up. Now if it’s important to you that I misspoke—“

Watch the showdown below: