Sweet home Chicago: Obama re-emerges in city where it all began 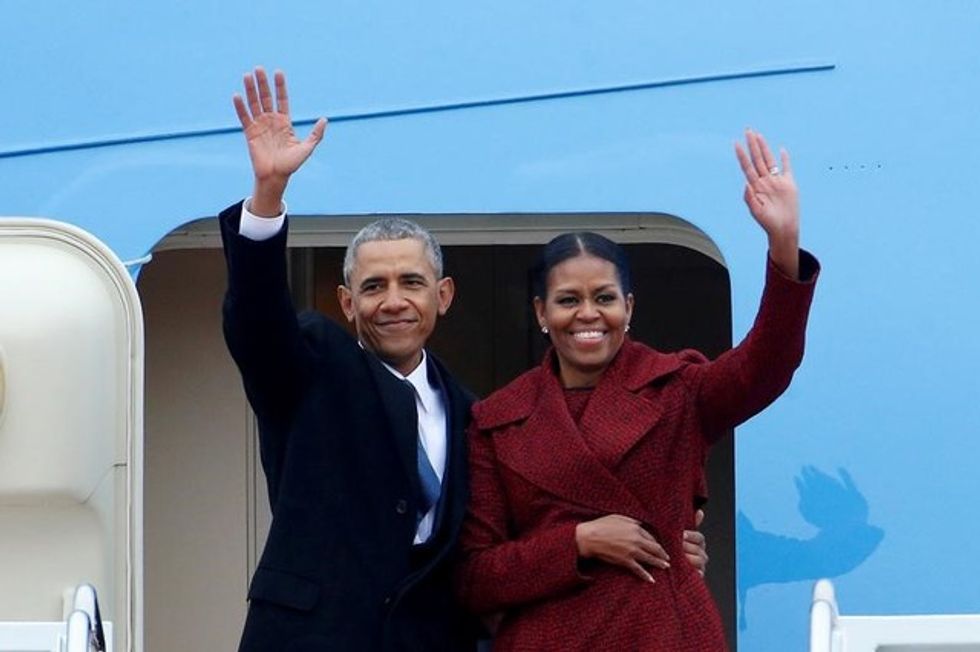 FILE PHOTO - Former president Barack Obama waves with his wife Michelle as they board Special Air Mission 28000, a Boeing 747 which serves as Air Force One, at Joint Base Andrews, Maryland, U.S. on January 20, 2017. REUTERS/Brendan McDermid/File Photo

Former U.S. President Barack Obama on Monday makes his first major appearance since leaving office, having chosen Chicago, the city where his political career started, to emerge from a three-month hiatus from the public eye.

Obama will meet youth leaders and promote community organizing near the same South Side neighborhoods where his own activism blossomed and propelled him to two terms in the White House that ended with Donald Trump's inauguration on January 20.

Chicago Mayor Rahm Emanuel, who served as Obama’s first White House chief of staff, said that he was proud that Obama picked Chicago to make his last speech as president and the first in his post-presidency.

“I think it reflects his emotional, as well as his intellectual, commitment to this city and seeing this city as his home,” he said.

Obama's continued connection to Chicago is important to the city, which has global aspirations as well as a palpable insecurity about its place in the world.

During the last year of Obama’s second term, Chicago laid claim to its share of his legacy by beating out Hawaii and New York as the site of his presidential library.

Obama, who still owns a home in Chicago, was raised in Hawaii. The former president and his wife Michelle are expected to move from Washington to New York once their younger daughter, Sasha, graduates from high school.

David Axelrod, a former top political adviser to Obama, said the decision to house the library in Chicago should have eased any concerns that its residents may have had about the former Democratic president's commitment to the city.

But Monday's event, he said, is another important sign of the former president's strong links to Chicago.

“He’s going to be more visible moving forward,” he said. “I think this is clearly a coming-out.”

Reverend Michael Pfleger, a social justice activist who heads a large South Side Roman Catholic church, said a prominent Obama presence could help the nation’s third-largest city confront some of the thorny problems it faces.

Chief among them is a spike in gun violence, an issue that Trump has highlighted as a sign of lawlessness and the failure of the Democratic politicians who have long run Chicago.

“It’s his life, and he’s not in elected office right now, so he can do what he wants,” Pfleger said. “But I’d love to see him engage in his home of Chicago. He could make a huge difference.”

Civil Rights activist Jesse Jackson said Obama could use his powerful platform to address stark inequalities in Chicago schools, housing and employment, and to advocate for reinvestment in blighted neighborhoods.

Monday's event takes place on the South Side campus of the University of Chicago, where Obama once taught constitutional law. It is intended “to encourage and support the next generation of leaders driven by strengthening communities,” according to a statement.

Since leaving office, Obama has kept a relatively low public profile, taking vacations in Palm Springs, California and the British Virgin Islands, where he indulged in the sport of kite-boarding while vacationing with British billionaire Sir Richard Branson.

Together with his wife, who grew up on Chicago’s South Side, the former president recently struck a two-book, $65 million memoir deal. He is expected to travel to Berlin to meet with German Chancellor Angela Merkel next month.