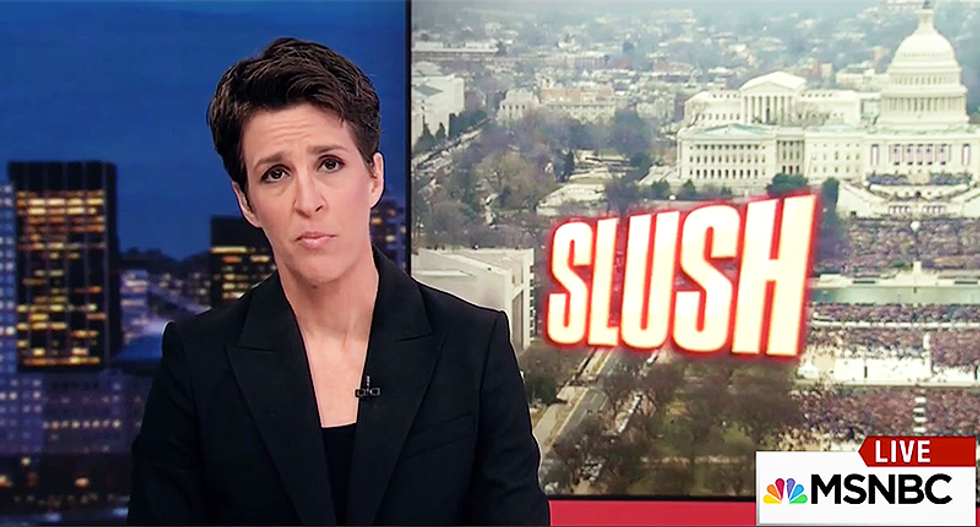 President Donald Trump raised $107 million for his inaugural committee, which was the largest amount raised in history. However, MSNBC's Rachel Maddow wants to know where all that money went, since there weren't that many people who attended his inauguration.

"They could have gold-plated every person at that inauguration and it still wouldn't have cost $107 million," Maddow said mocking the lack of people at Trump's inauguration. She described the money as "sloshing around" the Trump White House.

She specifically brought up a Venezuelan donation of over $600,000. The son of that donor then got a meeting with the White House and the National Security Council to talk about his ten-point plan to relax the sanctions against Venezuela.

"Venezuela is in dire straight, they do not have the money to spare," Maddow said showing footage of the recent unrest in the country. "Do you think he would have gotten the meeting with the national security advisor and the top advisor to the president if had he not given that money?"

"The sanctions that the U.S. put on Venezuela were put there in 2014 after 43 people got killed while participating in anti-government protests, another three people got killed in anti-government protests just yesterday," Maddow said. "There had been weeks and weeks of rioting and protests. There's a new filing from the White House that shows that interesting thing about the guy who got the meeting with the NSC officials and Steve banned. It also shows while Venezuelans have been rioting in the streets where there have been food and medicine shortages, a country that should be a rich country but people have been literally starving in Venezuela, somehow in the midst of this incredible crisis in Venezuela, Venezuela's state-run oil company somewhere found a half million dollars to donate to the very, very, very inexplicably over funded Trump inauguration. Venezuela's state-run oil company gave them $500,000 too."

Maddow went on to ask where the money was, who has it and what was it being used for if the inaugural committee didn't use it for the inauguration.

"Number two, not incidentally, the people rioting in Venezuela would like some of it back," she said showing footage of the protests in the streets.

Her final question was the most disturbing.

Maddow also showed footage of Trump criticizing former Secretary Hillary Clinton for "pay to play" politics, which he called illegal. It's unclear if Trump still believes this is illegal.

It is also unclear if this is the reason the Trump White House refuses to release visitor logs of those attending meetings with senior aides.