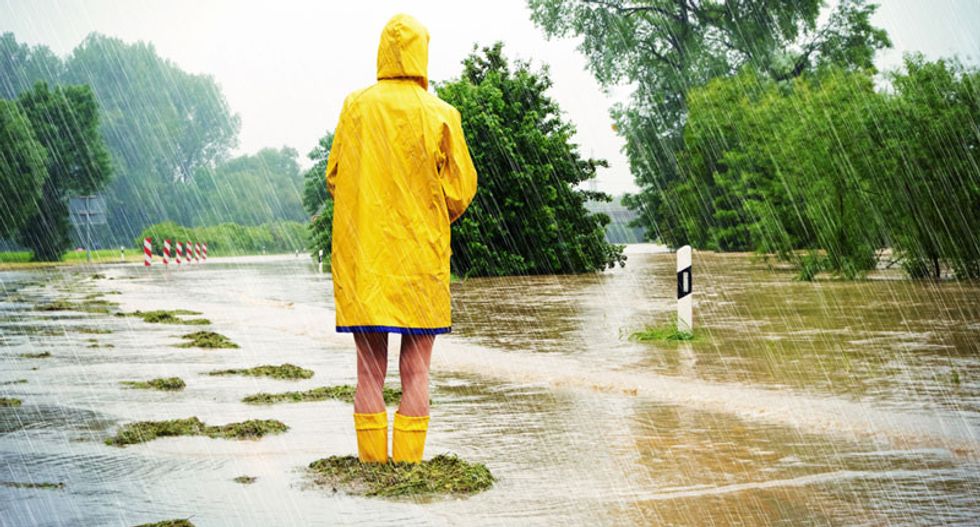 Woman on a flooded street (Shutterstock)

The beginning of a collapse this century of sections of the Antarctic ice sheet would disproportionately inundate coasts circling the U.S. — the country that has done more than any other to pollute the climate.

While such a cataclysmic outcome of warming temperatures from greenhouse gas pollution is considered unlikely, recent studies have shown it’s more plausible than previously thought.

Based on that research, the federal government increased its worst-case scenario for the rise of the seas worldwide by a quarter in January compared with 2014 findings, up to an average of more than 8 feet by 2100.

The impact would be even worse around the U.S. A National Oceanic and Atmospheric Administration report warned that regional effects of gravity and ocean current changes triggered by the start of the ice sheet’s collapse could lead to more than 12 feet of sea level rise engulfing some coastlines in the Lower 48. That’s about the height of a one-story house.

NOAA’s extreme sea level rise scenario would leave many American coastal cities almost completely submerged. For example, unless hulking new defenses are built to protect against floods, portions of New York City that are currently home to more than 800,000 would be underwater, Climate Central analysis of NOAA data shows.

There may be a 1-in-1,000 chance of the extreme scenario playing out if current pollution trends continue, though researchers say the figure is speculative, with more study needed. The likelihood nearly entirely vanishes if the global economy transitions quickly from polluting fuels to clean energy, as is envisioned by the Paris climate treaty. Weak climate policies and high pollution trends mean the world is not on track to meet the treaty’s central goals.

While it can be easy to dismiss the possibility of low-probability events occurring, they sometimes do occur.

The surprise western path taken by Hurricane Sandy into New York and New Jersey is only expected once every 700 years. By one estimate, California had a 1 percent chance of escaping its deep drought within two years — long odds it recently overcame. And President Trump won the election despite polls showing he had a slim chance of doing so.

The extreme sea level scenario was included with others in NOAA’s report to help local governments, agencies and other planners prepare for potential future shoreline conditions.

“We know this is a possibility, and the key task of science will be to figure out how probable it is,” said Robert Kopp, a sea level rise researcher at Rutgers University who helped compile the NOAA report. “We can be reasonably confident that we’re not going to be in the extreme scenario in the next couple of decades. Getting onto that extreme pathway — that’s something that would happen in the second half of the century.”

Data released with the report focused on the U.S., where coastal counties are home to 40 percent of the national population. Extreme levels of sea level rise would be higher along American coastlines than for global averages. 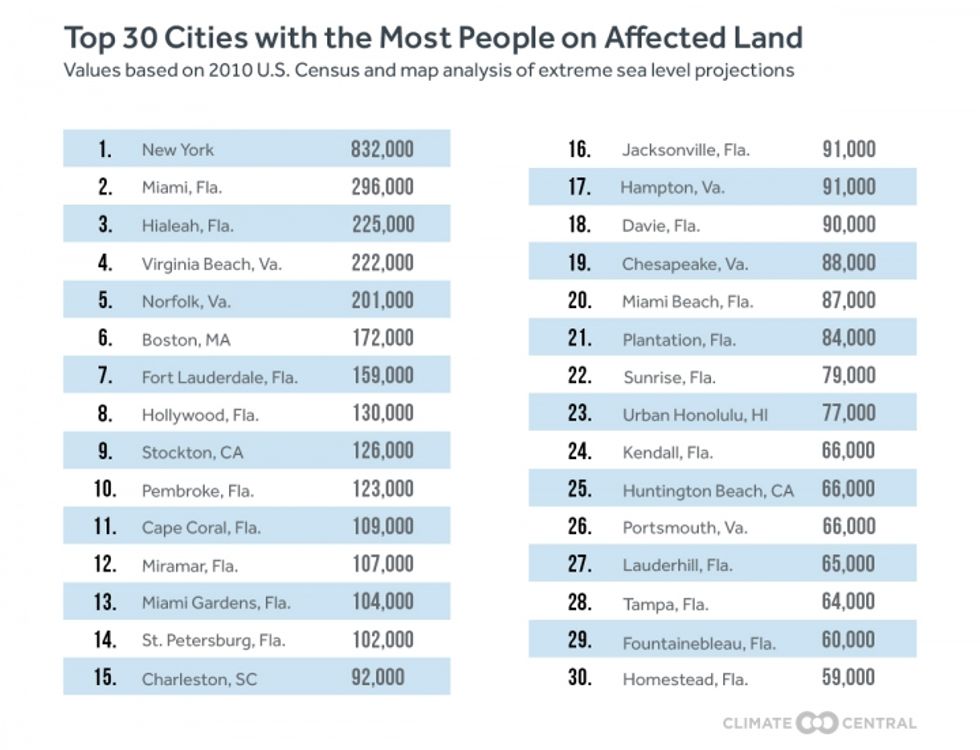 While Americans have released a quarter of all the pollution warming the planet since 1850, the U.S. is among the countries least vulnerable to the effects of global warming, with poor countries like Cambodia, Bangladesh and Senegal in the most danger. Under the extreme scenario, some islands could disappear, with island nations obliterated.

In a study published in the journal Nature Climate Change last week, University of Georgia demographer Mathew Hauer warned of mass migrations within the U.S. if seas rise 6 feet this century. The study projected that Florida could lose more than 2 million residents by 2100 — far more than any other state.

Hauer’s modeling suggested more than 1 million would move to Texas as they flee the effects of rising seas elsewhere. Migration flows would be “even more pronounced” under the extreme scenario outlined by NOAA, he said.

The January report was an update to projections included in the federal government’s 2014 National Climate Assessment, with extreme sea level rise scenarios based on recent Antarctic ice sheet modeling. It was published shortly before Trump took office with a goal of eliminating Obama-era climate protections.

The Antarctic ice sheet is the world’s largest reserve of frozen water, meaning its collapse would contribute more to the rise of the seas than the melting of glaciers elsewhere or the collapse of Greenland’s ice sheet. Because it’s so large, Antarctica’s ice sheet is relatively stable, although it’s already melting under the effects of rising temperatures. Scientists are trying to figure out how stable it really is.

Only a few coastal areas in the Lower 48 outside the Pacific Northwest were projected to receive less than 10 feet of sea level rise under the extreme scenario. Seas could rise along some Gulf of Mexico shores by more than 12 feet and by more than 11 feet along the much of the Atlantic coast.

Modeling by scientists at UMass and Penn State has shown how such a collapse could occur. Shelves of ice protruding from the continent would melt away as temperatures rise, and meltwater would seep into the ice sheet and crack it, producing cliffs of ice that collapse into the sea.

“In the worst case, the collapse will be in full swing by 2100, but will continue for centuries,” said Rob DeConto, a UMass professor who helped produce the modeling-based research, described last year in a high-profile study published in Nature.

John Lambert was sentenced to 13 month in prison for the scam targeting individuals with little experience seeking legal advice, for which he was paid at least $46,654 while delivering little of value to his victims, reported the New York Daily News.

Despite all the preening about "free speech" on the right, the truth is complaints about "cancel culture" have always been code for "conservatives can say whatever terrible things they want, and liberals can shut up about it." And while play-acting as the victims of censorship because liberals mock or criticize them, Republicans have been busy actually silencing free speech: from demanding that athletes be fired for kneeling during the national anthem to, memorably, Donald Trump ordering the tear-gassing of peaceful protesters in Lafayette Park. While conservatives whine about oppression because people call them "racist" on Twitter, they are actually using complaints about "wokeness" as an excuse for the literal government censorship of discourse that acknowledges the reality of racism, as Michelle Goldberg of the New York Times chronicled.

That's conservatism, of course: Always projecting their own sins onto their liberal opponents.