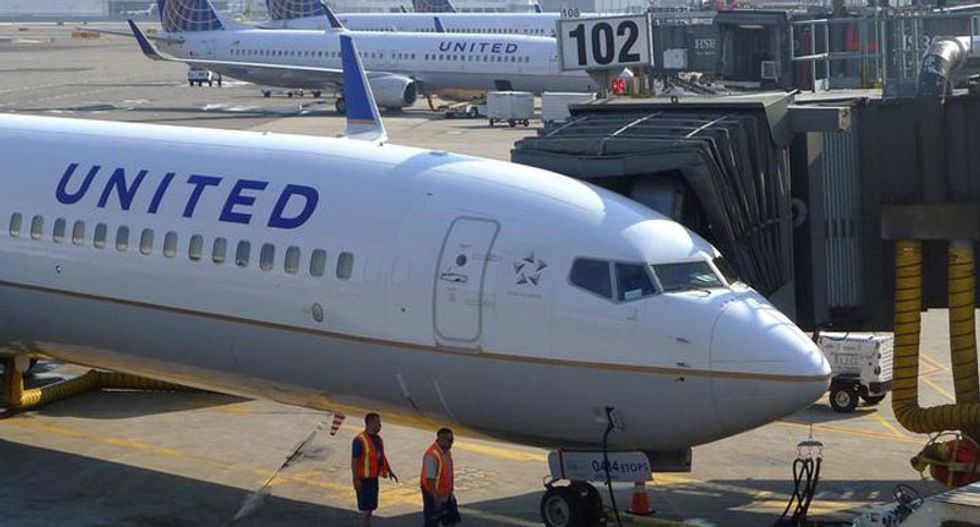 A doctor trying to return home to his patients was dragged by his hands from an overbooked United Airlines flight, according to social media, embroiling the carrier in its second public relations nightmare in less than a month.

The airline was one of the top-trending topics on Twitter as users took to the website to express their anger over the forceful removal of the passenger from United Flight 3411, which was en route from Chicago to Louisville, Kentucky, on Sunday.

Video of the incident posted to Twitter account @Tyler_Bridges shows three security officers huddling over the seated passenger, who appears to be an older Asian man, before dragging him on the floor.

The airline said it asked for volunteers to leave because additional flight crew needed to get to Louisville.

"This is an upsetting event to all of us here at United," Chief Executive Officer Oscar Munoz said in a statement. "I apologize for having to re-accommodate these customers."

Munoz said United was "moving with a sense of urgency" to work with the authorities and conduct its own review of the incident.

In Bridges' video, a woman asks: "Can't they rent a car for the pilots and have them drive?" Two uniformed men then reach into the doctor's seat and yank him from his chair.

The passenger screams as he is dragged on his back by his hands, glasses askew and shirt pulled up above his navel.

Another video shows him, still disheveled from the altercation, returning to the cabin, running to the back of the plane and repeating: "I have to go home."

Fellow passenger Jayse D. Anspach, who goes by @JayseDavid on Twitter, wrote: "No one volunteered (to leave), so @United decided to choose for us. They chose an Asian doctor and his wife."

While airport security staff were ejecting him, Anspach wrote, his face was slammed against an arm rest, causing his mouth to bleed.

"It looked like he was knocked out, because he went limp and quiet," Anspach wrote, "and they dragged him out of the plane like a rag doll."

Late last month, two teenage girls dressed in leggings were denied boarding on a United flight from Denver to Minneapolis because of their form-fitting pants.

Because the girls were using free passes for employees or family members, they were subject to a dress code.