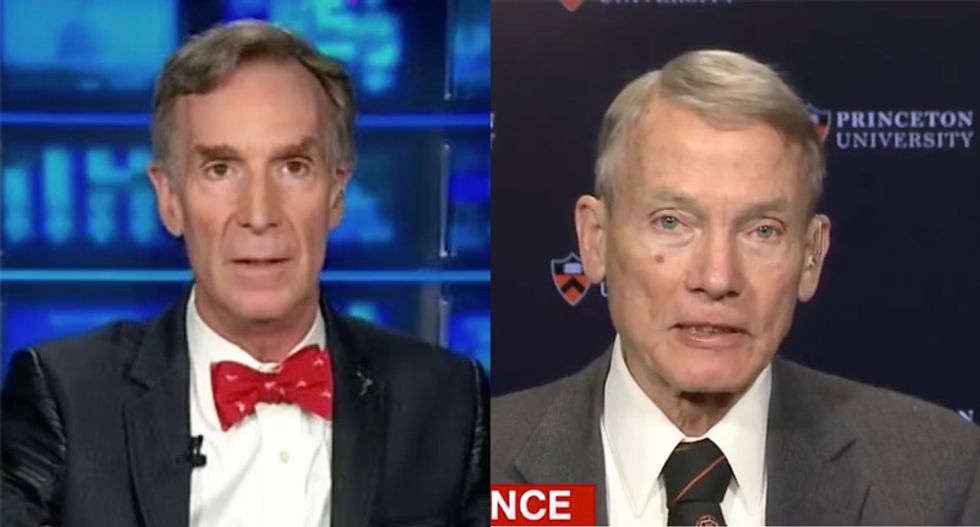 Appearing on CNN's New Day, prior to Saturday's Science March in Washington, D.C., "Science Guy" Bill Nye delivered a stern lecture to a climate-denying science adviser to President Donald Trump while also scolding CNN for having the man on.

Host Victor Blackwell began by introducing physicist William Happer, who has advised Trump on the environment, and who attempted to explain to the CNN audience that climate change is a "myth" and that the world is actually getting "greener."

"There's this myth that's developed around carbon dioxide that it's a pollutant, but you and I both exhale carbon dioxide with every breath. Each of us emits about two pounds of carbon dioxide a day, so are we polluting the planet?" Happer explained. "Carbon dioxide is a perfectly natural gas, it's just like water vapor, it's something that plants love. They grow better with more carbon dioxide, and you can see the greening of the earth already from the additional carbon dioxide in the atmosphere."

Asked to respond, Nye seemed exasperated from the start.

"What he claims to not understand is the rate. it's the speed at which we're adding carbon dioxide," Nye began. "And I will say, much as I love the CNN, you're doing a disservice by having one climate change skeptic and not 97 or 98 scientists or engineers concerned about climate change."

"Let me point out that science is not like passing a law," Happer replied. "You don't have a vote to say how many are for the law of gravity and how many are against -- it's based on observations. And if you observe what's happening to, for example, the temperature, the temperature is not rising nearly as fast as the alarmist computer models predicted. It's much, much less -- factors of two or three less. So the whole basis for the alarmism is not true, it's based on flawed computer modelling."

"That's completely wrong," Nye shot back. "He's cherry picking a certain model. the heat ended up in the ocean. this is not controversial in mainstream science, everybody."

Nye then scolded Happer for pretending climate change is a non-issue.

"I encourage you to cut this out so we can move forward and make the United States a world leader in technology," Nye lectured. "We want advanced wind turbines, advanced concentrated energy plants. If we were to do that, we would have at least 3 million new jobs in the United States that could not be outsourced. We would not need to have our military on the other of the world defending what people call 'our oil.' We could move forward and we could export this technology. We could be world leaders in this instead of wringing our hands and cherry picking data and pretending that this problem that's obvious to the scientific community but it is somehow not obvious to you."

"How so?" Blackwell exclaimed." How is this comparable to Neville Chamberlain's appeasement of Hitler? How is that an appropriate comparison?"

"It is an appropriate comparison because it was a treaty that was not going to do any good," Happer blandly replied as a disgusted Nye looked on. "This treaty also will not do any good. Anyone who looks at the results of doing what the treaty says can see that the effect on the earth's climate is -- even if you take the alarmist computer models, trivial. It will not make any difference and yet it will cause enormous harm to many people."