WATCH: Hillary Clinton goes off on Trump's act against transgender students and cuts to HIV/AIDS 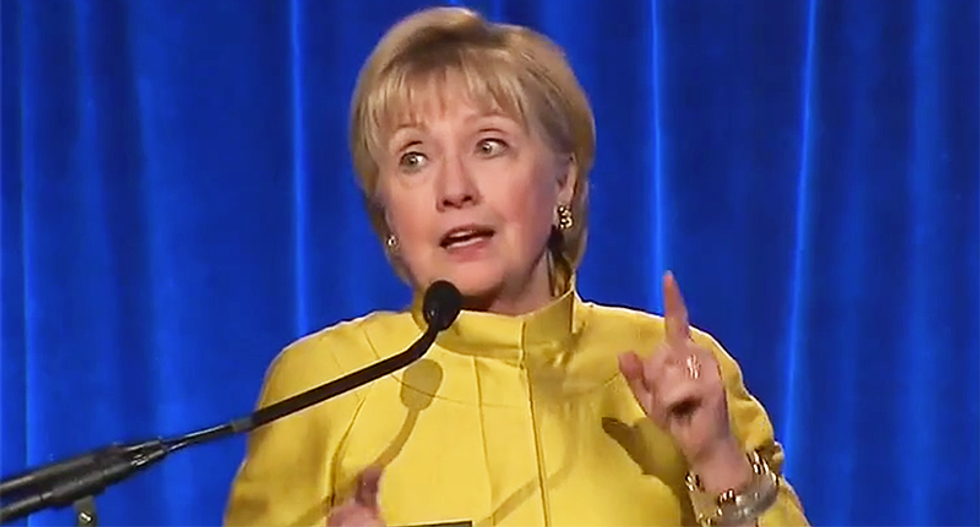 During the 2016 election, President Donald Trump claimed that no one would be a better friend to the LGBT community than he would. He slammed Democrats like Clinton and former President Barack Obama because he claimed they allow Muslims in the United States who, Trump said, will attack LGBT hot spots like the Pulse nightclub in Orlando.

Clinton, however, hammered Trump on according to a CNN transcript.

"The progress that we fought for, that many of you were on the front lines for ... may not be as secure as we once expected," she told the audience.

"When this administration rescinded protections for transgender students, my heart broke," Clinton said. "When I learned about the proposed cuts in funding for HIV and AIDS research, I thought about all of our efforts to try and achieve an AIDS-free generation."

Clinton went on to call out Trump for nominating Mark Green, a rabid opponent of LGBT people and LGBT rights, to replace Army Secretary Eric Fanning, the first ever openly gay man to hold the post.

"Some of the changes that we're seeing should seem small, but they matter a great deal if you're the person affected," Clinton continued. "Others carry historic significance, like the future of the Supreme Court."

She made a call to arms to the audience, begging them to keep fighting.

"I know the election hit a lot of us hard," she said. "I can tell you this: Even when it feels tempting to pull the covers over your heads, please keep going. Please. Remember those who came before. Remember how we got to this huge banquet hall because of activists at Stonewall...

She celebrated the group's decision to invest in advocacy and organizing. She pointed to "glimmers of hope" in the court system that continues to uphold rights for all LGBT people.

"I've had a new mantra these last few weeks," Clinton continued. "The kind of thing that does pop into your head when you're out in the woods. But I really do find it's a good way to remind ourselves when you feel a little down when a good friend or a relative tells you to quit yelling at the television, just remember: we need to resist, insist, persist and enlist and make sure our voices are heard loud."

Watch a short clip below, captured by Alexandra Bergstein, who attended the event: