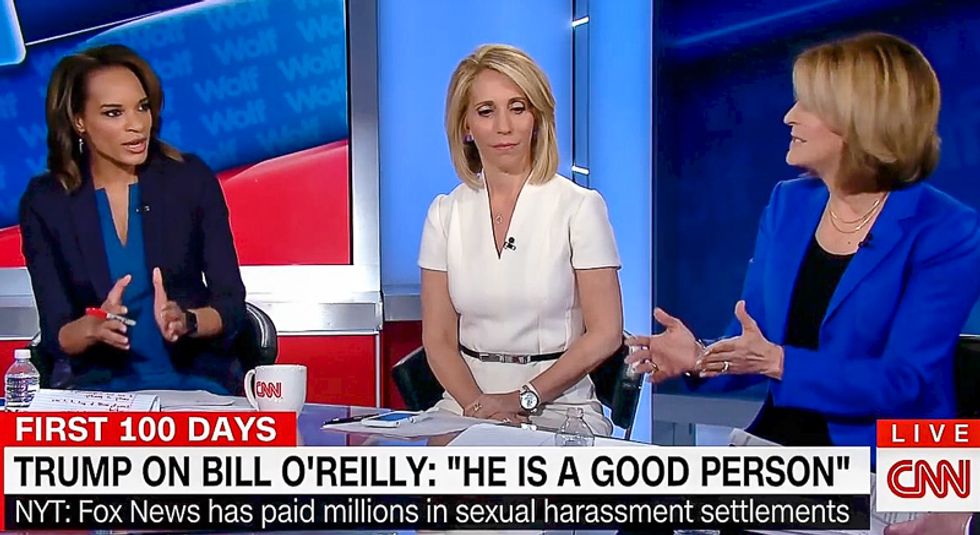 A CNN panel on Wednesday condemned President Donald Trump for using the power of his office to delegitimize the women who have accused Fox News host Bill O'Reilly of serial sexual harassment.

While speaking to The New York Times from the Oval Office, Trump reacted to a recent report published by the paper which claimed that Fox News has paid out $13 million to O'Reilly's victims to settle sexual harassment lawsuits.

During a panel discussion on Wednesday, CNN chief political correspondent Dana Bashed rolled her eyes at the president's comments.

"Don't talk about Bill O'Reilly and sexual harassment suits when you know nothing about the context and the content of what those suits are," Bash advised. "It's nice that he's a loyal friend, it's nice that they've known each other for years and years and he's coming to his defense. But he's the president of the United States."

"And to [defend O'Reilly], no matter how nice he's been, is completely inappropriate," Bash added. "Knowing nothing about the substance."

"Based on nothing!" CNN contributor Nia-Malika Henderson exclaimed. "And this is after the White House made a big showing of Women's History Month and how welcoming it was to women and talking about Ivanka Trump and empowering women and economic empowering of women."

"And for him to come out and essentially say there's not any there there in terms of these women," she continued, "it's troubling. He should have said 'no comment'."

Henderson pointed out that Trump had his own history of being accused of sexual harassment, and he was caught admitting in a leaked Access Hollywood tape that he could grab women by the genitals because he was a celebrity.

"So he probably should have just passed on the question," Henderson said.

"I'm sure that the aides who were in that room were not happy when he weighed in on this," Borger speculated.

"They probably got physically nauseous," Bash agreed as if she were speaking from personal experience.

"Don't these people have jobs to do?" Henderson asked. "This is insane."

Bash concluded with a recommendation that CNN cover Trump's policies instead of his comments about O'Reilly.