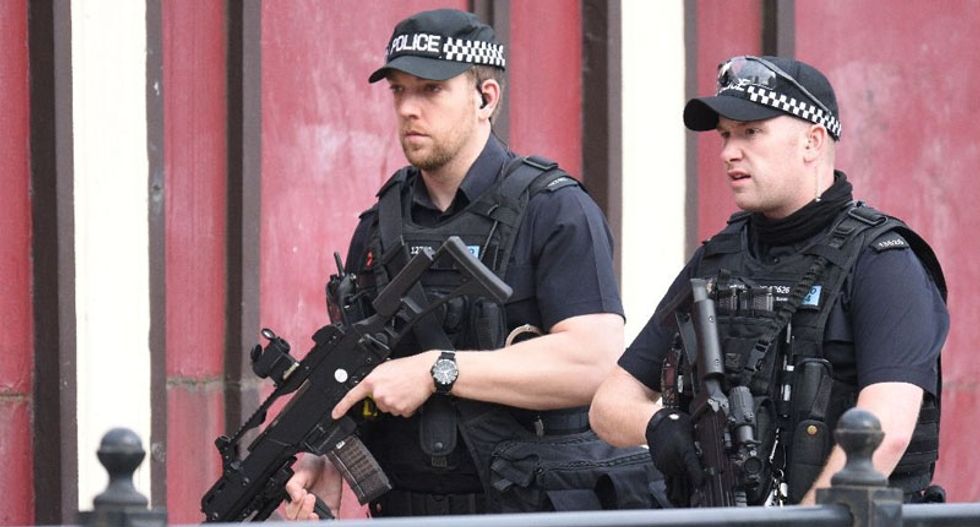 A suicide bombing at a packed Manchester pop concert designed to cause "maximum carnage" killed 22 people including children, in the deadliest terror attack in Britain for more than a decade.

British Prime Minister Theresa May said police know the identity of the bomber, who died in the blast late Monday, and believed he acted alone.

However, police arrested a 23-year-old man on Tuesday morning in connection with the attack.

Screaming fans, many of them teenagers, fled the venue in panic after the explosion at the end of a sold-out concert by US star Ariana Grande in the 21,000-capacity Manchester Arena, in northwestern England.

"A single terrorist detonated his improvised explosive device near one of the exits of the venue, deliberately choosing the time and place to cause maximum carnage and to kill and injure indiscriminately," May said in a statement outside Downing Street after an emergency ministerial meeting.

The blast occurred in the foyer of the indoor arena, a covered area which links the auditorium to Victoria Station, a train and tram hub.

Witnesses reported being near the arena's ticket machines and merchandise stores, as chaos ensued inside the concert hall.

While 22 people have been confirmed dead, many of the 59 people injured have life-threatening conditions, May said.

"We know that among those killed and injured were many children and young people," the prime minister added.

Eyewitnesses reported seeing bodies on the floor after the blast around 10:30pm (2130 GMT) on Monday, and some fans were trampled as panicked crowds tried to flee the venue.

"There were fathers carrying their little girls in tears," Sebastian Diaz, a 19-year-old from Newcastle, told AFP.

Families were separated, with dozens of young people taken to nearby hotels overnight, and some parents were still desperately seeking for their children on Tuesday.

"I'm just hearing nothing -- her phone's dead," Charlotte Campbell, whose 15-year-old daughter Olivia was at the concert, told BBC radio.

The first victim named was Georgina Callander, an 18-year-old from Lancashire in northwest England, whose death was announced by her college.

The attack was the deadliest in Britain since July 7, 2005 when four suicide bombers inspired by Al-Qaeda attacked London's transport system during rush hour, killing 52 people and wounding 700 more.

It revived memories of the November 2015 attack at the Bataclan concert hall in Paris in which armed men wearing explosive belts stormed in and killed 90 people. That attack was claimed by the Islamic State jihadist group.

May said it was "a callous terrorist attack", conducted with "appalling, sickening cowardice" and Queen Elizabeth condemned it as an "act of barbarity."

Britain's national terror threat level has been "severe", meaning an attack is highly likely, since August 2014, and May said this would remain unchanged, but under review.

Campaigning for the June 8 general election, in which May's Conservatives are expected to regain power, has been suspended.

US President Donald Trump led condolences from political leaders across the globe, as well as stars from the world of music and football.

"So many young, beautiful, innocent people living and enjoying their lives murdered by evil losers," Trump said during a visit to Bethlehem.

Grande, who is popular with teens and pre-teens, expressed her anguish following the attack.

"Broken. From the bottom of my heart, I am so, so sorry. I don't have words," the 23-year-old wrote on Twitter.

The pop world also rallied, with Katy Perry tweeting: "Praying for everyone at Ariana Grande's show."

US pop princess Taylor Swift, a friend of Grande, wrote: "My thoughts, prayers and tears for all those affected by the Manchester tragedy tonight."

"A lot of these people at the concert were small children and teenagers like my daughter," witness Stephanie Hill told AFP.

"These were Christmas presents for the majority of people. What should have been a happy occasion has ended like this, it is just tragic."

Another witness, Gary Walker, told BBC radio he was hit by shrapnel in his foot and his wife sustained a stomach wound as they waited for their daughters.

"Someone came through the doors, then bang," he said.

In a city famed globally for its musical traditions and football teams, showbusiness stars and teams joined in to express their shock at the carnage.

"We are deeply shocked by last night's terrible events at the Manchester Arena," said Manchester United, who are in Stockholm ahead of Wednesday's Europa League final against Ajax.

A support centre for people caught up in the attack was set up at the home of Manchester City, which is next door to the venue.

City captain Vincent Kompany offered his condolences on Twitter, saying: "It's a sad day for the great city of Manchester. #Unity".

May confirmed she would travel later Tuesday to Manchester to meet with police and emergency services.

She hailed the city's response to the attack, which saw residents opened their doors to stranded concert-goers after trains were cancelled.

Britain's third biggest city was hit in 1996 by a massive car bomb planted at a shopping centre by the Irish Republican Army (IRA) which wounded more than 200 people.