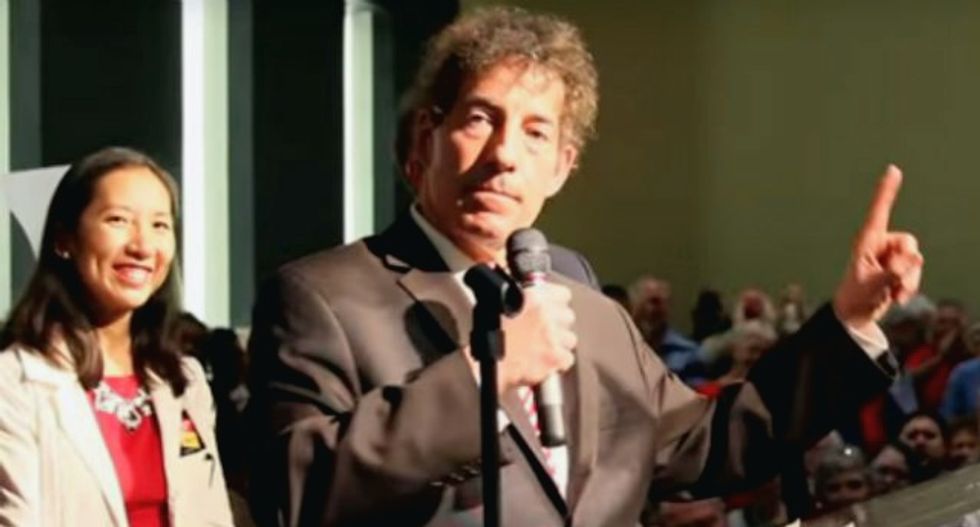 Maryland Congressman Jamie Raskin received thunderous applause in January when he told a packed crowd at Bowie State University that he may soon be voting on the impeachment of President Donald Trump. Screengrab of The Young Turks youtube video of the rally.

Congress has never used the authority the 25th Amendment gave it to create a permanent body for determining presidential fitness to execute the responsibilities of the office.

Freshman Representative Jamie Raskin (D-Maryland) had been in congress less than 100 days when he introduced legislation to remedy this with the Oversight Commission on Presidential Capacity Act. Since he introduced H.R. 1987, it has garnered twenty cosponsors from fourteen states.

Such deference to a new member on such a weighty issue is rare, but Congressman Raskin is highly respected in this field. Before joining Congress, Raskin spent decades teaching constitutional law at American University’s Washington College of Law. He also rose to Senate Majority Whip during his three terms in the Maryland State Senate.

“The 25th Amendment was adopted 50 years ago, but Congress has never set up the body it calls for to determine presidential fitness in the event of physical or psychological incapacity," Raskin said. "Now is the time to do it."

Raskin's statement today was made against a different political backdrop than when he first introduced his legislation.

It was noted by The Hill that, "his statement Friday announcing the legislation comes amid Democrats expressing alarm over President Trump abruptly firing James Comey as FBI director this week amid the agency’s investigation of whether Trump associates colluded with the Russian government to influence the election."

Along with impeachment, the 25th Amendment is one of the legislative mechanisms to legally remove a president. Raskin may be content to see Donald Trump removed via either option, Raskin is on CNN's running list of members discussing impeachment.

While pushing the bill on Twitter today, Raskin said Trump's, "incapacity" must be seriously addressed.

As for the 25th Amendment, Raskin wants to set up an 11 member commission.

"Ten members of the Commission would be selected by congressional leadership. The Speaker of the House, House Minority Leader, Senate Majority Leader, and Senate Minority Leader each select one physician and one psychiatrist to serve on the Commission," is how Congressman Raskin summarized his bill to create an independent, nonpartisan body. "Additionally, each party selects a retired statesperson (e.g., former Presidents, Vice Presidents, Attorneys and Surgeons General, Secretaries of State, Defense, and Treasury) to serve. The 10 appointed members then select an 11th member, who acts as the Chair of the Commission."

Congressman Raskin is the author of Overruling Democracy: The Supreme Court versus The American People and We the Students: Supreme Court Cases for and about Students, which is now in its fourth edition.