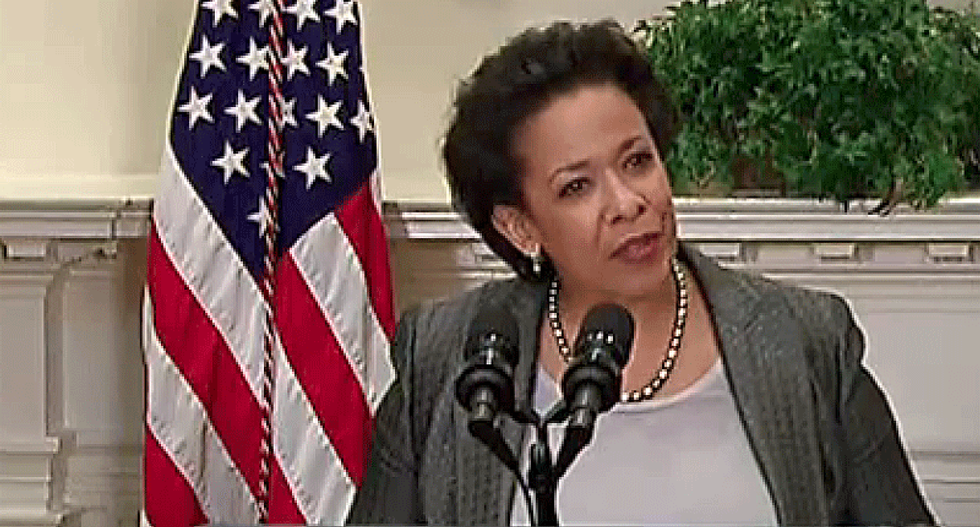 Loretta Lynch as President Barack Obama nominates her for US Attorney General (WhiteHouse.gov)

A dubious Russian intelligence document that purported to show coordination between Hillary Clinton and the U.S. Justice Department, and prompted former FBI Director James Comey to disclose the bureau’s investigation into Clinton’s emails, was “bad intelligence” and “possibly even fake,” the Washington Post reports.

According to the FBI’s own assessment, the American contacts mentioned in the Russian document—which described an email exchange between former Attorney General Loretta Lynch and officials working on behalf of 2016 Democratic candidate Hillary Clinton—deny having had any conversations “remotely” similar to those described in the memo. By August 2016, the Post reports, the FBI concluded the memo was unreliable.

Current and former officials say that document led Comey to announce, in July of 2016, that Clinton was “extremely careless” in her handling of classified information, while simultaneously exonerating the former Secretary of State of any wrongdoing. As the Post notes, Comey’s announcement “set in motion” a chain of events that arguably led to Clinton’s demise.

The document itself claimed to describe an email conversation between former DNC chair Rep. Debbie Wasserman Schultz (D-FL) and an official with the George-Soros founded organization Open Society Foundation. It did not include an actual transcript of the conversation.

Per the document, Wasserman Schultz admitted former AG Lynch contacted Clinton campaign staffer Amanda Renteria, indicating she would not push too far on into the investigation of Clinton’s emails. The revelation of that since-debunked document led Comey to reveal the existence of an FBI investigation into Clinton’s emails.

But, according to Lynch, she never met Renteria.

“Just so you know, I don’t know this person and have never communicated with her,’’ Lynch told FBI officials, the Post reports.

Schultz similarly pushed back on the notion of a conversation between herself and an official with Open Society, identified as Benardo.

“Not only do I not know him, I’ve never heard of him,’ Schultz said. “I don’t know who this is. There’s no truth to this whatsoever. I have never sent an email remotely like what you’re describing.’’

Despite the memo’s dubious origins, sources told the post it was “a very powerful factor” in Comey’s decision to reveal an investigation into Clinton’s email server—and ultimately determine the bureau should not prosecute her,

“The point is that the bureau picked up hacked material that hadn’t been dumped by the bad guys [the Russians] involving Lynch,” a source told the Post. “And that would have pulled the rug out of any authoritative announcement.”