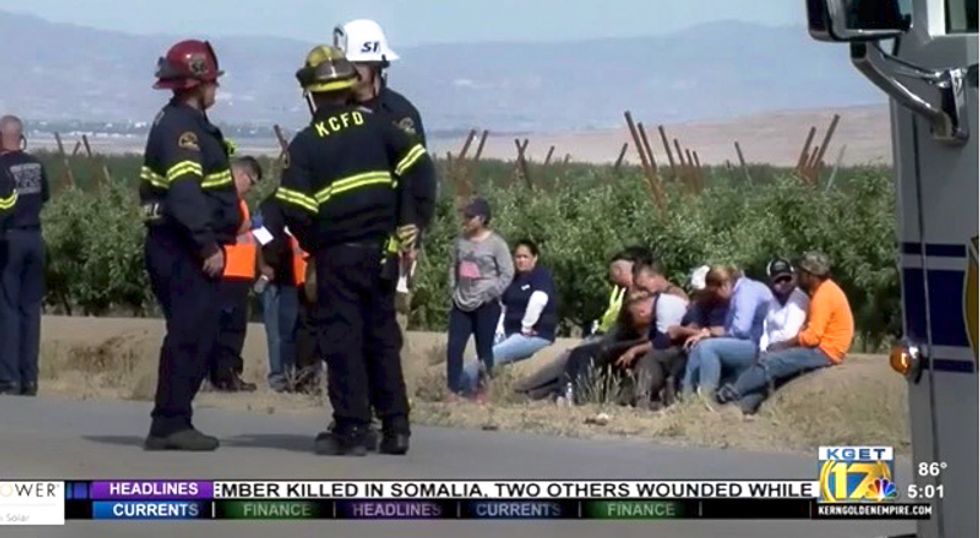 Dozens of farmworkers were pulled out of the fields last week after they were poisoned by a chemical that was recently approved by President Donald Trump's administration -- even though the previous administration had taken steps to ban it.

KTEG reported that at least 50 farmworkers were exposed to the pesticide on Friday, causing cabbage harvesting operations to be shut down at Dan Andrews Farms.

"We started getting an odor, pesticide odor, coming in from the mandarin orchards west of our field," Dan Andrews supervisor Efron Zavalza told the station.

Zavalza explained that Vulcan pesticide, which contains a poison called chlorpyrifos, was sprayed on the orchards the night before workers came to work the cabbage fields.

"I'm not pointing fingers or saying it was done incorrectly. It was just an unfortunate thing the way it was drifted. The wind came and pushed everything east and you know we were caught in the path," he observed.

KTEG confirmed that "[t]welve people reported symptoms of vomiting, nausea and one person fainted." The station also noted that more than half of the 50 workers left the scene before medical services arrived.

According to Mother Jones, the Obama administration had taken steps to effectively ban the use of chlorpyrifos, but that changed after Trump appointed Scott Pruitt to lead the EPA.

“By reversing the previous Administration’s steps to ban one of the most widely used pesticides in the world, we are returning to using sound science in decision-making – rather than predetermined results," the agency said in a statement in March.

Experts say that children who have been exposed to the chemical can experience brain damage and a lower IQ. The National Institutes of Health concluded that chlorpyrifos can cause "adverse developmental, reproductive, neurological, and immune effects."