‘From, Woman in the White House’: Kellyanne Conway taunts Hillary Clinton with own version of why she lost 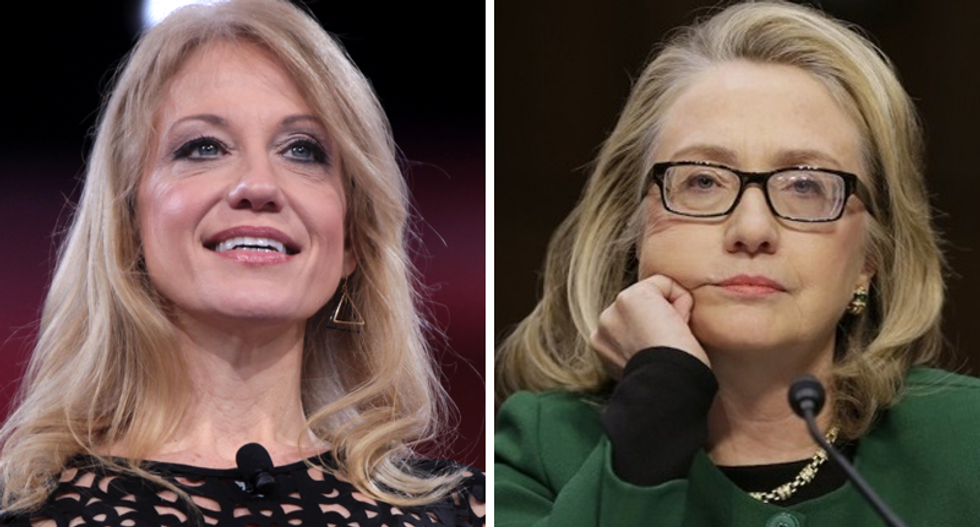 Counselor to the president Kellyanne Conway mockingly referred to herself as a “woman in the White House” during an attack on former Democratic presidential candidate Hillary Clinton Tuesday.

You Ignored WI Called us deplorable/irredeemable Had oodles of $$ & no message Lost to a better candidate From: W… https://t.co/Ax2vZB9s10
— Kellyanne Conway (@Kellyanne Conway) 1493774516.0

Conway was referring to an interview Clinton gave with CNN’s Christianne Amanpour, during which the former Secretary of State said she took “absolute personal responsibility” for her failed presidential bid, but argued “there was a lot of funny business going on” with regards to FBI director James Comey and a concerted effort by Russian operatives to influence the election in favor of Donald Trump.

Clinton also argued mysogyny “played a role” in her defeat, adding institutionalized sexism is “very much a part of the landscape politically and socially and economically.”

Conway seemed to argue that those elements did not have anything to do with Clinton’s loss, while also taunting the former First Lady for failing to “break the glass ceiling” and win the White House.

Following his win, Trump boasted that his administration “shattered the glass ceiling for women” when Conway became “the first female campaign manager of either major party to win a presidential general election.” Though Trump promised his administration would be “the best for women,” critics point to his majority-male cabinet, pledge to defund Planned Parenthood, and his history of alleged sexual assault as evidence that he’s not as pro-women as he claims.