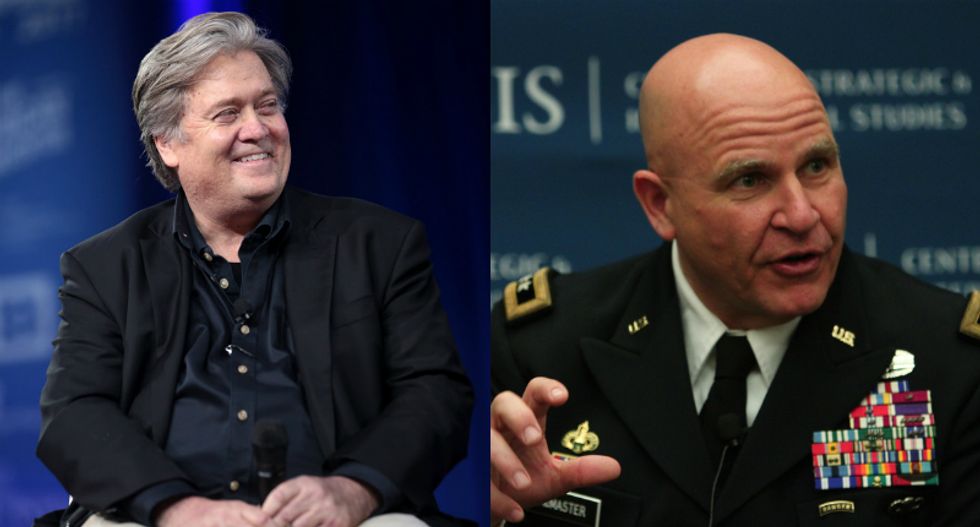 The Foreign Policy article alleges that the turning tide against McMaster is the result of Bannon's maneuvering to get Trump on his side regarding Afghanistan policy.

McMaster's policy would reportedly send between three and five thousand American and NATO troops to Afghanistan to help the country's National Security Forces fight the Taliban and al Qaeda. As of May 8, the White House declined to comment on whether or not McMaster's policy proposal had been accepted.

It's currently unclear what Bannon's policy suggestions are or why he is opposed to McMaster's plan, but there appears to be evidence to suggest that Bannon is attempting to smear McMaster.

MSNBC host Joe Scarborough, who is said to be friends with the president, tweeted that "Several WH sources say the Gen McMaster stories are coming from Bannon and are false. Trump has full confidence in McMaster."

The tension between the two, according to Haartez, dates back to April's air strike in Syria -- a strike that McMaster supported and potentially pushed onto the president, but that Bannon was against. McMaster, who was installed onto the National Security Council after disgraced national security advisor Michael Flynn was booted off of it, is also said to have orchestrated Bannon's exit from the council as well.

“McMaster is pushing this Afghanistan policy through," an anonymous intelligence official told FP. "I think some people are giving him the rope to get it through, hoping he hangs himself with it."

Another source told FP that the White House's palace intrigue that centers around Bannon and Trump's son-in-law Jared Kushner was comparable to a "Game of Thrones for morons".