Here are 8 embarrassing things Trump did on his European tour 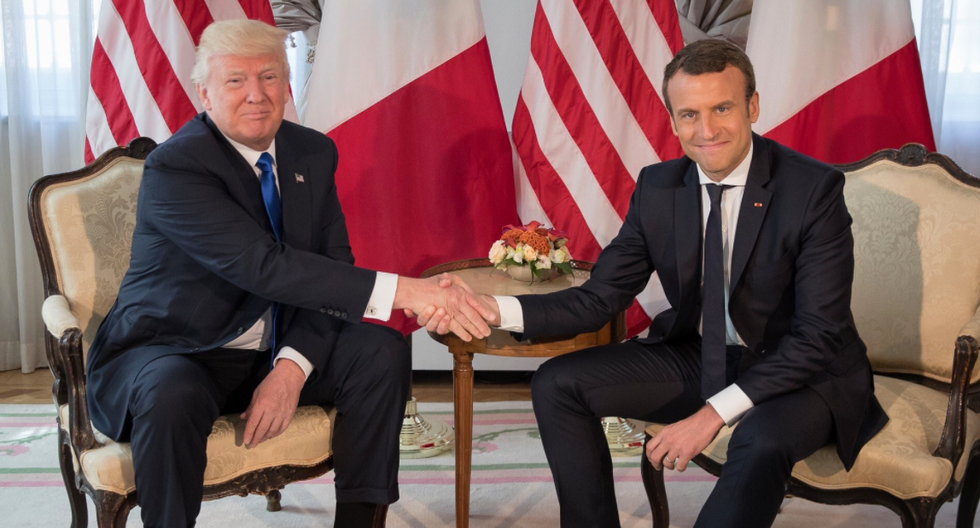 For nine days, Donald Trump has been traveling across the Middle East and Europe, bringing every terrible stereotype about “ugly Americans” to vivid life. He labeled Germany (where he doesn’t have business interests) “very bad” after saying nary a critical word in Saudi Arabia (where he does have business interests). He chastised our partners in NATO while revealing he doesn’t actually understand how it all works. He literally threw his weight around like an attention-starved problem child, and he broadcast his every move to the world via his cellphone, which would be a security risk if we had a president anyone wanted to kidnap.

Mostly—when he wasn’t trading arms for political and personal gain—Trump acted like an embarrassing boor. He can’t help proving that he and his followers are the punchlines to a joke the rest of the world is laughing at.

1. Lied to the new French president about supporting him in the election even though it’s really easy to find out he didn’t.

“You were my guy," Trump reportedly said to newly elected French president Emmanuel Macron, a quote that suggests the president doesn’t know many of us have eyes and ears and internets that prove he’s lying. For someone so practiced at lying, the president remains terrible at it.

While Trump never explicitly endorsed noted Islamophobe, Holocaust revisionist and French National Front leader Marine Le Pen, he gushed over her racist bonafides during the French election. "She's the strongest on borders, and she's the strongest on what's been going on in France," he said in an April interview with the Associated Press. "Whoever is the toughest on radical Islamic terrorism, and whoever is the toughest at the borders, will do well in the election."

On April 21, a couple days shy of the first round of voting, and 24 hours after the shooting of a police officer on the Champs-Élysées, Trump tweeted, “Another terrorist attack in Paris. The people of France will not take much more of this. Will have a big effect on presidential election!”

2. Tried to pull that weird, aggressive handshake move with Macron and failed.

Probably because of his insecurity about his wittle Vulgarian fingers, Trump turns every handshake into a textbook display of macho posturing and heterosexual male insecurity. It’s happened enough times now that word has gotten around, and Macron had reportedly been forewarned by French ambassador Gérard Araud. The result, as you can see in a video below, was that Macron was fully ready for a hands-only cagematch and Trump found himself out-muscled by his French counterpart. Quelle tristesse!

Arriving at NATO headquarters, Macron doubled down, and then tripled down on his Trump diss. First, as Macron walked toward Trump in a cluster of world leaders, he did a super conspicuous dodge of the U.S. president and instead veered toward German chancellor Angela Merkel and also anyone not named Donald Trump. Only after Macron ran out of ways to avoid Trump did he finally take Trump’s extended hand, but immediately turned the American president’s yank-and-pull tactic against him. Watching the video, below, you can almost hear every single person thinking, is this guy for real?

Of course, it makes sense that Trump would develop a new respect, and probably a reverence for anyone who beats him in a pissing match. After repeatedly witnessing Macron’s feats of strength, Trump turned fanboy and decided he wanted Macron for a new best friend. "Do you want my cell phone [number] so we can speak directly to each other?" Trump reportedly asked the big, strong Frenchman.

5. Physically pushed Montenegro’s leader out of his way.

Trump wanted to be in the front row when pictures were taken so he pushed his way to the front of the crowd of assembled leaders. That included shoving Montenegro Prime Minister Duško Marković to one side. A lot was written about Trump’s offensive behavior, but CNN pointed out a mostly overlooked bit about NATO, Montenegro and Trump’s idol, Vladimir Putin:

This was Markovic's and Montenegro's first NATO summit. The tiny Balkan country has just been accepted into the alliance, much to Moscow's chagrin. How much chagrin? Authorities in Montenegro say they stopped a Russian-backed plot to kill Markovic's predecessor, which was aimed at preventing Montenegro from joining NATO. They have arrested 14 people, including two Russians. (Russia denies involvement.) The plot, prosecutors say, sought to install a new government loyal to Russia and opposed to Montenegro's efforts to grow closer to the West and to NATO. The plot failed, and now Montenegro is becoming NATO's 29th member.

Watch how, after bullying his way to the front, cocky Trump tugs on his suit jacket with smug satisfaction. Because he is the absolute worst.

6. Made a NATO speech that gave world leaders a good, derisive laugh.

“NATO members must finally contribute their fair share and meet their financial obligations,” Trump said in a lecture he delivered at NATO headquarters. “But 23 of the 28 member nations are still not paying what they should be paying, and what they are supposed to be paying, for their defense. This is not fair to the people and taxpayers of the United States.”

Trump seems to think NATO is like a social club, with member nations paying dues into some central kitty. It isn’t. A 2014 agreement established that member countries should be spending 2 percent of their GDP on their own military defense. Those countries have until 2024 to hit that goal. Trump is trying to be the world’s policeman on a policy that’s neither set in stone nor even a concern for another seven years. It’s also rich coming from someone whose most noted business practice is a refusal to pay his debts.

The speech went over like a lead balloon with assembled world leaders, who smirked, snickered and whispered to each other as Trump spoke. In the video below, Luxembourg’s Xavier Bettel and France’s Macron seem to share a giggle at Trump’s expense.

“And I never asked once what the new NATO headquarters cost,” Trump added. “I refuse to do that.”

7. Riding in his golf cart while everyone else walks in Italy,

A summation of Trump’s afternoon on Saturday, from the Times of London:

The distance between Donald Trump and his G7 partners was spelled out dramatically today when Theresa May and the leaders of Italy, France, Germany, Japan and Canada strolled the streets of Taormina, Sicily — while he followed in a golf cart.

The six are planning to put pressure on Mr. Trump over his opposition to free trade and efforts to combat climate change. They walked the 700 yards from the traditional G7 group photo, taken at a Greek amphitheater, to a piazza in the hilltop town, but Mr. Trump stayed behind until he could take a seat in the electric vehicle.

He had been the last to arrive for the photo, keeping the others waiting at the amphitheater…

8. Complained that he hasn’t been given carte blanche to make a fast buck in Europe.

“Every time we talk about a country, he remembered the things he had done. Scotland? He said he had opened a club. Ireland? He said it took him two and a half years to get a license and that did not give him a very good image of the European Union,” according to a source who spoke with Belgian outlet Le Soir. “One feels that he wants a system where everything can be realized very quickly and without formalities.”