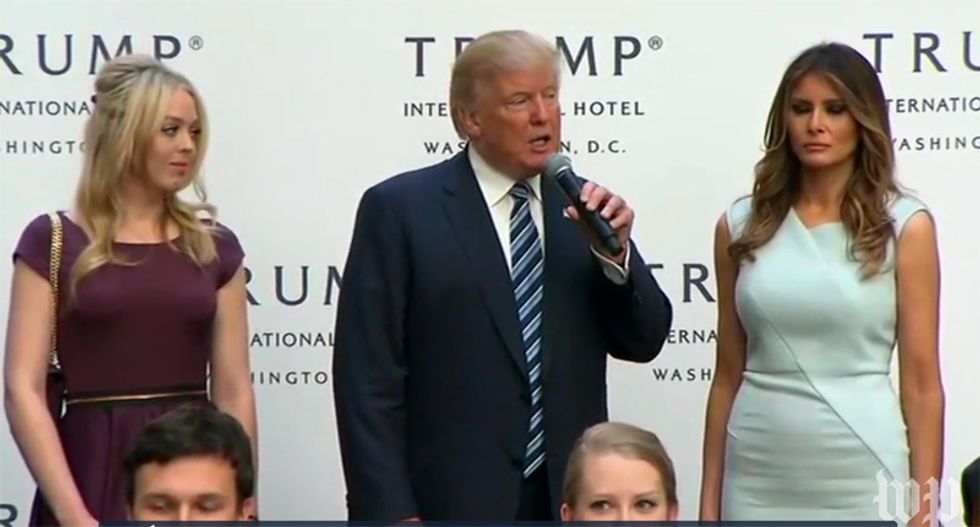 If you're planning a visit to Washington, D.C., you'll be pleased to know that rooms are readily available at the current U.S. president's Trump International Hotel -- but bring your wallet.

According to Bloomberg News, the pricey hotel, that opened with great fanfare just a dozen days before the 2016 election has become a hub for Republican lawmakers, lobbyists and various current and former Trump associates where they can indulge in $100 vodka cocktails.

Bloomberg notes that, during their visit, $600 rooms at the former Old Post Office -- built in 1899 -- are available while the nearby Ritz-Carlton and Four Seasons hotels were booked up.  If your taste is for something a bit more pricey than a $600 room, you can always upgrade to a suite named after first Daughter Ivanka Trump that goes for about $940 a night.

To help pay for all of that gold -- and put money in the president's pocket --  you can order a $110 porterhouse for two or a $16 tarragon lobster fondue, enjoy a $340 couples massages in a spa also named for Ivanka Trump, or have your diamonds whitened for a price.

According to banking lobbyist and former Eric Cantor adviser Aaron Cutler, the prices are worth it.

“It’s a nice place to go when you want to have a conversation with somebody and you don’t want somebody on top of you listening in,” he explained.