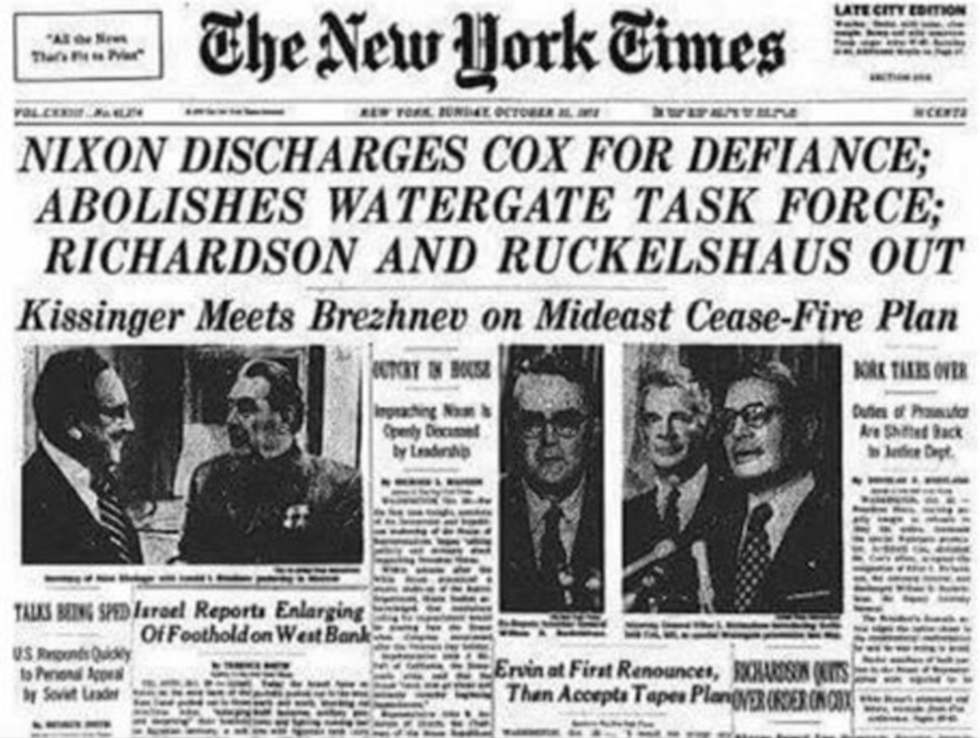 Nixon badly misjudged the mood of the country which wanted the investigation to go on. The President was fighting against the release of his White House tapes at the time. Public outcry and concern from Congress led Nixon to re-establish the office of special prosecutor and he started turning over limited numbers of White House tapes. Not long after this dramatic series of events Time Magazine ran an editorial calling for the President to resign. Nixon responded by saying he was not a crook.  It would take another nine months of national agony and turmoil before the weight of evidence and the move toward impeachment was so strong that the President did resign.

That was then. We can learn a great deal from Watergate that might help inform us about the current situation. Mostly we can learn how a president tried to use high officials to insulate and protect him from the investigation. We easily forget how extensive this web of conspiracy and obstruction of justice was. Sixty-nine people were indicted in Watergate-related crimes, 48 were convicted, including seven of the burglars, but also two U.S. Attorneys General, two Counsels to the President, the President’s chief of staff, and dozens of others. It was not just about Nixon. It was massive corruption in the White House.

Today’s salvo with President Trump firing the FBI director while his own campaign is under investigation for possible collusion with Russian agents, is a completely different context and a completely distinct set of investigations. We should carry historical analogies only so far. With events breaking rapidly it is impossible to give this firing a well-rounded context. It is within the President’s authority to remove the FBI director. Director Comey has become a lightning rod with the way he has publicly injected information about investigations into a presidential election. His actions at best seem arbitrary and inconclusive, yet they were explosive revelations in the middle of a political campaign, where the FBI had no place.

Trump’s letter firing Director Comey is disturbingly Trumpian. Trump uses the letter to remind the public that on three occasions Director Comey told Trump he was not being investigated for his involvement with Russians during the campaign. In other words, Trump uses his letter firing the FBI director to focus on his own innocence. The letter started out being about the President not the FBI director. Then the President told Comey that he was not the right person to lead the agency anymore.

Earlier, Trump fired Acting Attorney General Sally Yates because she had serious reservations about the constitutionality of Trump’s Muslim ban. He should have listened to her. It was the same Sally Yates that alerted President Trump that his pick to be national security adviser, General Mike Flynn, could possibly be blackmailed by the Russian government.  She was doing her job of protecting the president and the United States. Trump kept Flynn in office another 18 days before firing him.

Our current Attorney General, Jeff Sessions, picked because he was one of the first senators to come out and campaign vigorously for Trump, has been forced to recuse himself from any direct involvement in the Russian investigation because he had contact with the Russian ambassador that he did not reveal to the Senate during his confirmation hearings.

I must say that this murkiness in high places of government, this uneasy feeling that things are helter-skelter in the White House is causing me to experience similar levels of frustration, angst, and confusion just like a lot of us felt during the slow unfolding of the Watergate nightmare.

Who is left to investigate? Long ago I called for the need to renew the office of special prosecutor and to move these investigations to an independent body of highly skilled non-partisan professional people of the highest integrity.  We have such people in this country. We have the talent, we have the skills, we have the honesty and integrity in this country to do this thing right. The American people will never be able to fully trust the President and his administration until this is cleared up. Unfortunately, it might take two years or more to get to the bottom of this mess. But we should start right now.

Ray Smock is the director of the Robert C. Byrd Center for Congressional History and Education at Shepherd University. He was Historian of the U. S. House of Representatives from 1983-95. He is co-editor of the two volume Congress Investigates: A Critical and Documentary History (2011).
Opinion
Report typos and corrections to: corrections@rawstory.com.