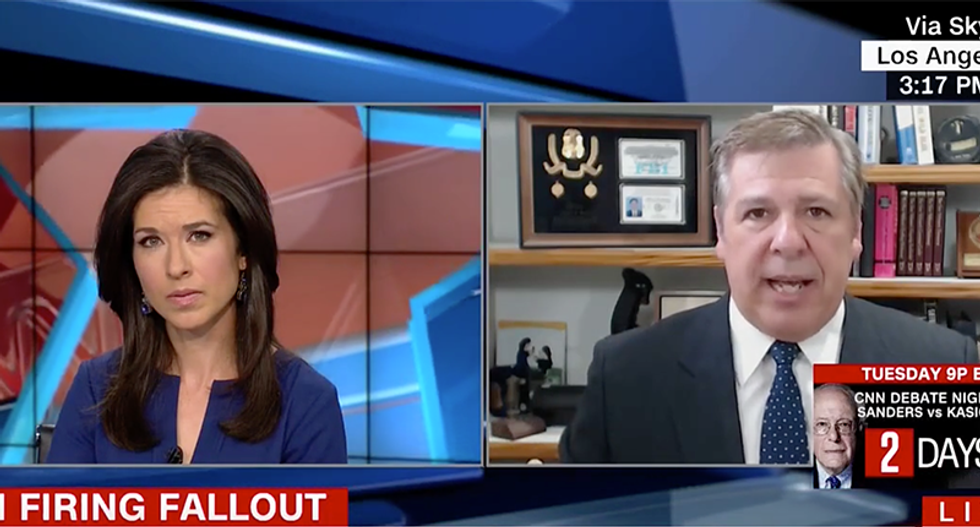 "I think a lot of agents are going to be surprised to hear they were in turmoil," Moore said in response to Trump's comment. He went on to say that the only concern, if there was one, was that a certain case wouldn't be prosecuted under the previous administration.

"They weren't going to be able to get a grand jury going and that did cause some consternation in the bureau," Moore continued. "And again, the only consternation there was in the bureau, according to my friends at the time, is they felt that Comey was not being listened to. He wasn't able to persuade the administration at that point."

According to Moore, since the election, there hasn't been much turmoil.

When it comes to Huckabee-Sanders, Moore said that he is clearly talking to different FBI agents than she is talking to. She told the press last week that she's received "a large number" emails and text messages from FBI officials grateful for Trump's actions.

"I think the only type of agent who would be happy with that firing is somebody who was a die hard Donald Trump fan," he said. "Generally the agents aren't in favor of their director being fired, especially when they believe that he was pursuing legitimate cases."

He went on to say that the morale in the FBI is defiant in the wake of the Comey firing.

"They've got their neck up a little bit about this," Moore continued. "See, FBI agents have finally calibrated BS meters. And whether this was the case or not, when the sitting president fired the director at a time when the president's organization or the president's campaign or administration, whatever you call it, was part of an investigation of potential Russian meddling in a U.S. election, the agents smelled a rat."

He went on to explain that it's what the agents are trained and paid to do.

"They're paid to follow smoke and see if there's fire," he explained. "So, right now I would say that the agents are supporting a full and exhaustive investigation in this case which will result in either the clearing of the administration completely or further revelations which aren't pleasant."

'They smell a rat': Former FBI supervisor... by sarahburris