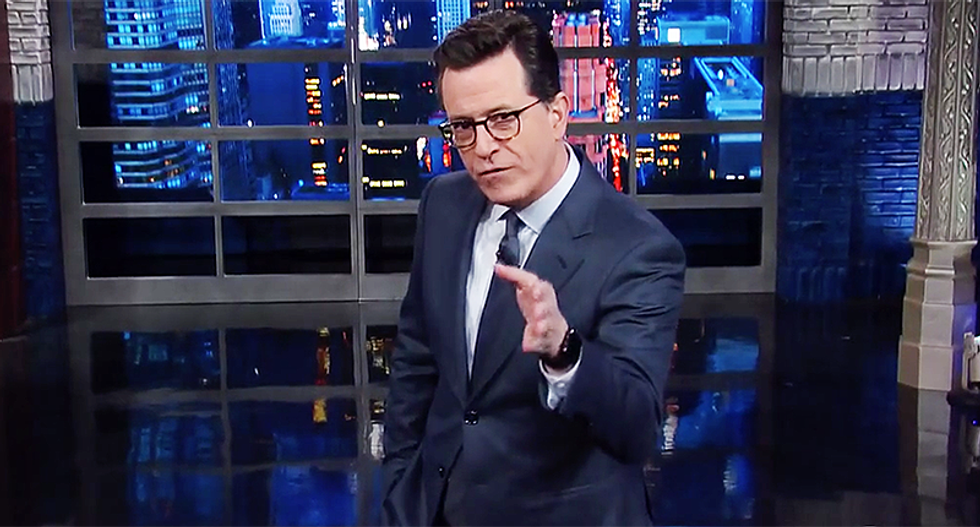 Stephen Colbert on Monday defended fellow CBS host John Dickerson against Donald Trump after the president told the renowned journalist he refers to the (award-winning) news program "Face the Nation" as “Deface the Nation.”

“Donald Trump, John Dickerson is a fair-minded journalist and one of the most competent people who will ever walk into your office,” Colbert began during his opening monologue on “The Late Show.”

Colbert noted Dickerson has too much “dignity to trade insults with the president of the United States to his face,” adding “But I, sir, am no John Dickerson.”

“Here we go,” Colbert began, before ripping into Trump.

Colbert said Trump “attracts more skinheads than free Rogaine,” has “more people marching against [him] than cancer,” and talks “like a sign-language gorilla who got hit in the head.”

Going all-in against the president, Colbert added: “Sir, the only the only thing your mouth is good for is being Vladimir Putin’s cock holster."

Watch the takedown below, via CBS:

Tonight: Stephen tells the President everything journalists, restrained by their dignity, wish they could say. #LSSC pic.twitter.com/FHG4jvF8fv