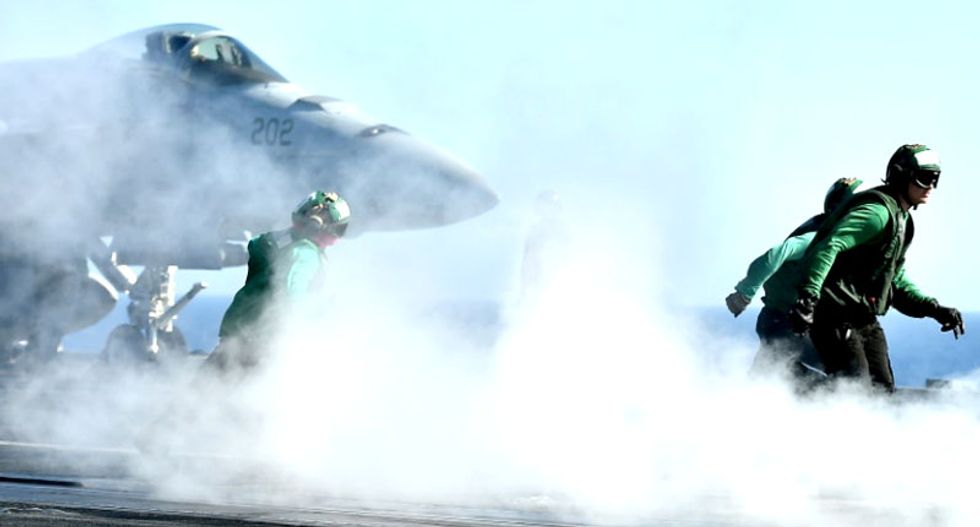 Dozens of relatives of Islamic State fighters were killed on Friday in new US-led strikes on Syria, just hours after the UN urged nations striking the jihadists to protect civilians.

Bombing raids by the US-led coalition have pounded IS positions across Iraq and Syria since the jihadist group claimed responsibility for the devastating bombing of a concert in Manchester on Monday.

Scores of civilians, many of them families of IS members, have been killed in bombing raids in recent days on the eastern Syrian town of Mayadeen, held by IS since 2014.

Early Friday, at least 80 relatives of IS fighters were killed in US-led coalition bombardment, according to the Syrian Observatory for Human Rights.

"This is the highest toll for relatives of IS members in Syria," he told AFP.

Coalition strikes on the town killed 37 civilians on Thursday night after 15 had been killed on Wednesday, according to the Britain-based Observatory.

The US military on Friday confirmed that it had struck "near Mayadeen" on May 25 and 26, but said it was "still assessing the results of those strikes", according to Pentagon spokesman Eric Pahon.

The US military insists that it takes every precaution to avoid hitting civilians, but the United Nations on Friday urged parties bombing IS to do more.

The Observatory gathered its information from civilian and medical sources on the ground in IS-held Mayadeen.

The town has seen an influx of displaced families from IS-held territory in Iraq and Syria, including its bastion Raqa.

It is in Syria's oil-rich east near the border with Iraq -- a region considered a prize by many of IS's enemies including the Syrian army.

Troops loyal to President Bashar al-Assad have been waging a multi-pronged offensive east to reach the strategic border territory.

They scored a key victory this week by linking the capital Damascus to the UNESCO World Heritage city of Palmyra in central Syria.

It was the first time the government was in full control of the Damascus-Palmyra highway since 2014, according to Abdel Rahman.

With backing from Russian air strikes, regime fighters "pushed IS fighters out of desert territory amounting to more than 1,000 square kilometres (390 square miles)," he said on Friday.

A decades-old ally of Damascus, Moscow has been carrying out air strikes in support of Assad's troops since September 2015 -- a year after the American-led coalition began targeting IS in Syria.

The 68-member coalition began bombing IS in Iraq in the summer of 2014, and expanded operations to Syria on September 23 that year.

On Thursday, a Pentagon investigation concluded that at least 105 civilians died in an anti-jihadist air strike on an IS weapons cache in Mosul in March.

Before the new revelation, the US military had said coalition air strikes in Iraq and Syria had "unintentionally" killed 352 civilians since 2014.

Rights groups put the number much higher, and the Observatory this week reported the highest monthly civilian death toll for the coalition's operations in Syria.

It said between April 23 and May 23, coalition strikes killed 225 civilians in Syria, including dozens of children.

Reports of civilian casualties in the air campaign have swelled in recent days.

On May 20, US Defence Secretary Jim Mattis said US President Donald Trump had instructed the Pentagon to "annihilate" IS in Syria in a bid to prevent escaped foreign fighters from returning home.

The president has "directed a tactical shift from shoving ISIS out of safe locations in an attrition fight to surrounding the enemy in their strongholds so we can annihilate ISIS," Mattis said, using an acronym for IS.

But the Pentagon has denied that its rules of engagement have changed and insists that the coalition continues to strike only "military-appropriate targets".