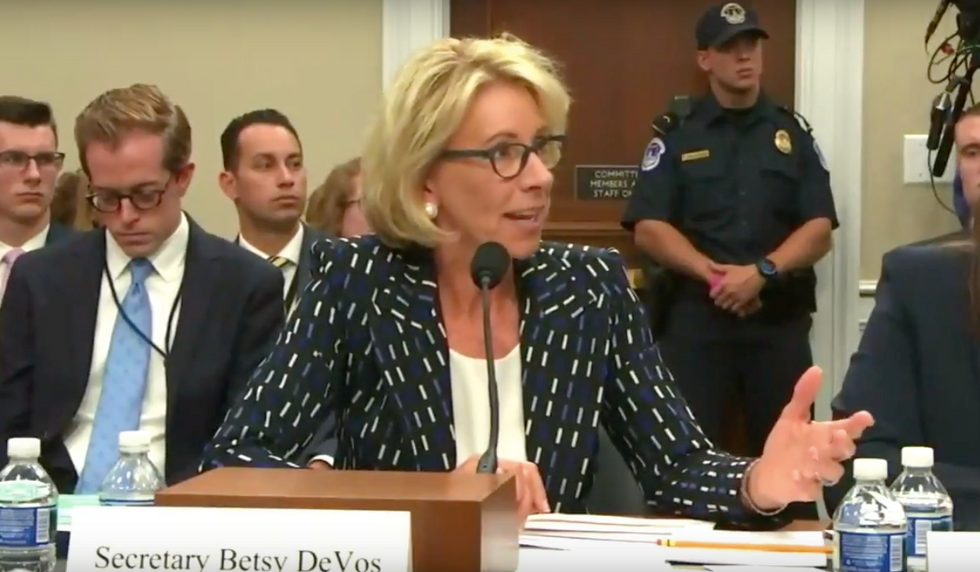 Rep. Mark Pocan (D-WI) asked DeVos if she would consider sending her own children to an underperforming charter school. Citing Wisconsin's "failed experiment in taxpayer-funded voucher schemes and for-profit charters."

Students in Ohio, Indiana and Washington, D.C. received charter school vouchers only to see their test scores drop, Pocan said. He cited a number of Milwaukee Journal articles that showed charter school and voucher students performed the same or lower than public school students in math and reading proficiency.

He pointed to one military-style charter school run by Right Step, Inc. in which only 7 percent of students demonstrated English language proficiency and zero percent in math.

"I just want to ask you," Pocan said to DeVos, "would you send your kids to a school where they have 93 percent of the students aren't English proficient and zero percent are math proficient?"

DeVos thanked the congressman for his question and mused for a moment on how nice it was that he's from Wisconsin.

"I only have five minutes," Pocan prompted DeVos.

She deflected, saying the charter schools experiment was begun by Democratic Milwaukee city councilwoman Polly Williams. Pocan replied that yes it was and the councilwoman is no longer living, but before she passed away, she declared the voucher program a failure that "failed to live up to its promises."

This set off a tense back-and-forth before he gave up, saying, "I can see you're not going to answer my question."