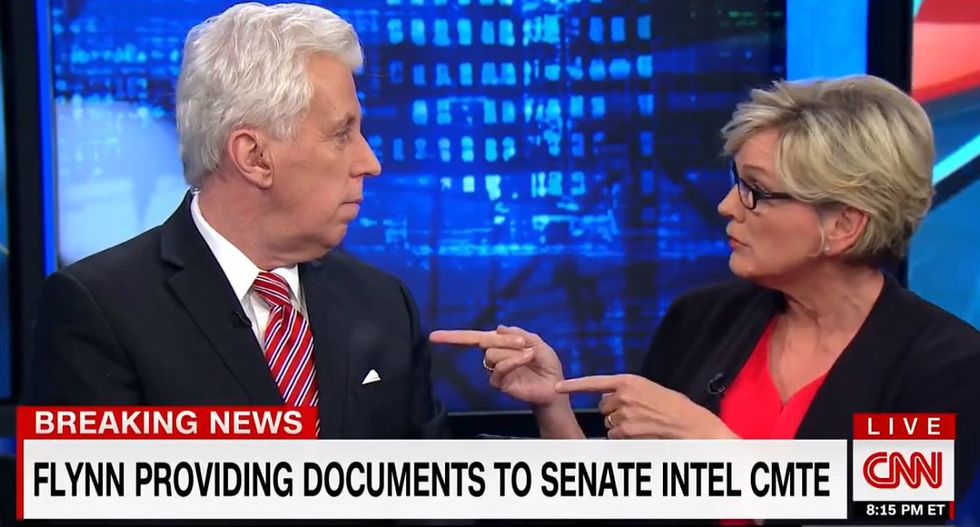 Jeffrey Lord, a longtime supporter of President Donald Trump and regular guest on CNN, often brings a notepad of prepared factoids to assist his outlandish claims when he appears on panels. But when former Michigan governor and fellow panelist Jennifer Granholm debunked his well-prepared screed on Tuesday's AC360, he was left speechless.

In his typical fashion, Lord attempted to deflect reports that Trump's son-in-law Jared Kushner's meetings with allies to Russian President Vladimir Putin were inappropriate by listing off examples of other back-channel establishments with Russia and other nations.

"I just think this is overblown," Lord said. "By my count, President Kennedy had his brother talking to Georgi Bolshakov, who was a mid-level associate back channel for the Kennedy administration. Jimmy Carter as president-elect sent Averell Harriman to talk to Anatoly Dobrynin and that conversation was written up by Dobrynin himself, it's in the Wilson Center."

He went on to list off other famous (and innocuous) presidential back-channels, including one cited a HuffPost article by conservative analyst Michael Ledeen discussing an Iran back-channel President Barack Obama established while still a candidate. The story about Obama's campaign back-channel also appeared in Breitbart a few days ago.

"There's nothing unusual," Lord began, before being cut off by both Cooper and Granholm.

"I so admire your persistence, Jeffrey" Granholm said while patting Lord on the back, "in the face of what are really unbelievable facts, serial facts."

"This is not about Jared Kushner being some naive Bambi, he did have Flynn next to him, Flynn certainly knows what's going on," she said, referencing reports that claim disgraced national security adviser Mike Flynn was in a Trump Tower meeting with Kushner and Russian Ambassador Sergey Kislyak.

"If you hear the president continue to say 'fake news,' it causes many of us to say, 'ah, what's underneath this,'" she concluded.

Watch the entire segment below, via CNN.