'All that has happened': CNN's Jake Tapper crushes Rand Paul's lie that climate predictions are wrong 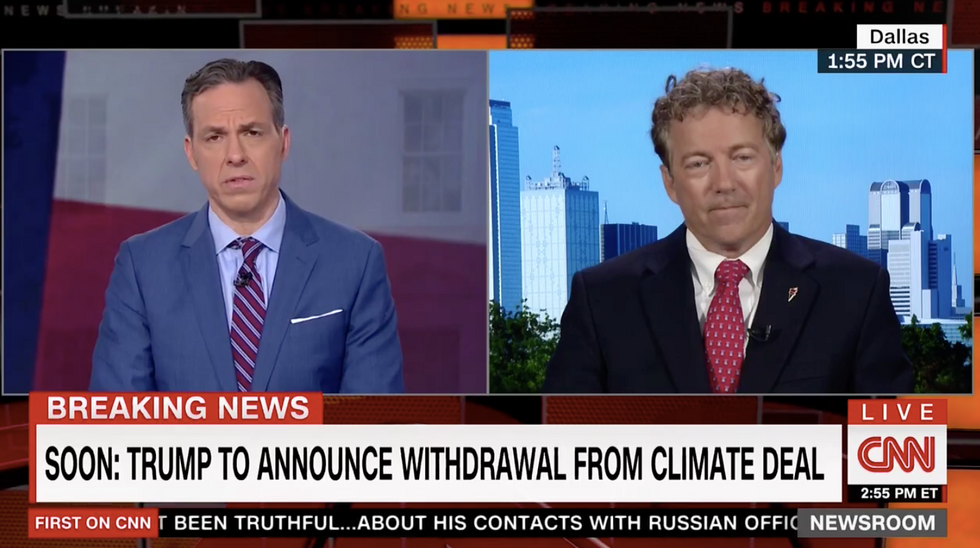 Paul -- who was largely agnostic on the question of climate change until he ran for president in 2015 and abruptly veered to the right as he sought donor money -- trotted out a number of anti-science arguments to justify withdrawal from the historic climate pact.

"I can't imagine a worse agreement for the American worker," Paul said, claiming that the initiative would cost the U.S. six million jobs and force the country to pay developing nations not to pollute.

"I don't know what study you're referring to, Senator," Tapper said. "Where would these 6 million American jobs come from? It seems like a rather dire prediction."

"Well, they're in the energy industry," said Paul. "A lot of ours have been lost in Kentucky. We've lost, you know, nearly 90,000 jobs in the coal industry because of excessive regulation."

He complained about activists saying, "My goodness, the sky is falling" because the world is billions of years old and the most severe climate change events happened millions of years before the industrial revolution. Climate activists are being "alarmists" he said and want to hobble U.S. business with their talk of lowering the U.S. carbon footprint.

"And if we don't sign the Paris accord there's going to be 'mass extinction?'" he mocked. "That is a ridiculous statement."

He then proceeded to tell Tapper how to do his job.

"You need to make sure that your viewers know that most of [climate scientists'] models has been wrong," Paul said. "They adjust it every year because they haven't been good at predicting things."

"But obviously scientists have been predicting for years that the temperatures would go up, that glaciers would shrink, that sea ice would disappear, that oceans would rise, that the sea level would rise and there would be longer and more intense heat waves and all of that has happened, Senator," Tapper corrected Paul -- who ran afoul of controversy in 2013 when it was revealed that he was plagiarizing his campaign speeches word-for-word from Wikipedia. "All of it has happened."