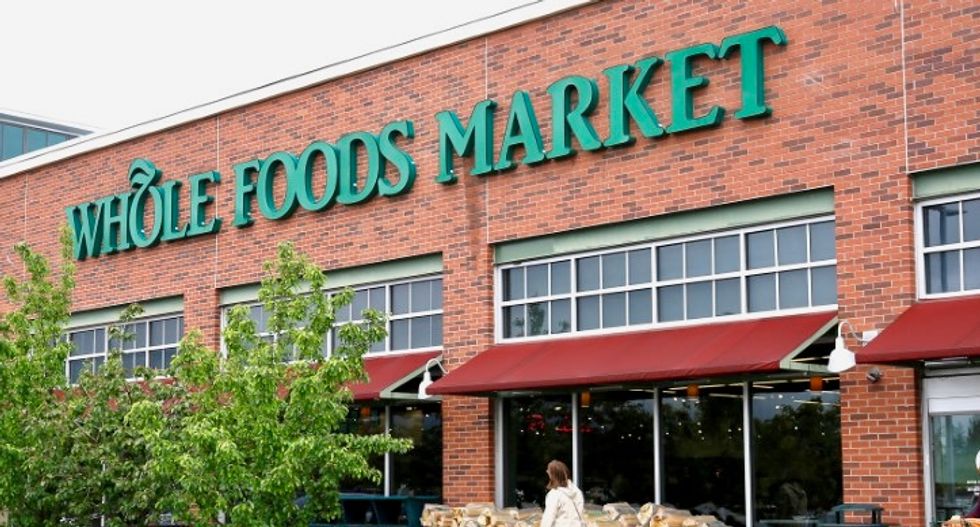 Amazon.com Inc is buying Whole Foods Market Inc for about $13.7 billion at a price of $42 a share, the companies said on Friday.

"I think that I would not like to be somebody playing in the grocery space right now.

"Whole Foods has given up a lot of market share because they didn't capitalize on being the leader in organic, but they still have a footprint. It's a little different when you're Amazon. Whole Foods has to make money, Amazon doesn't have to make money. All Amazon's got to is grow. And now they've got a platform for doing that!

"I think we'll see very aggressive pricing out of Amazon in grocery, which will include the Whole Foods component."

“You can't think of this as a traditional antitrust problem because people who go to Whole Foods to touch the produce and get the freshest asparagus are not going to shop at Amazon... I don't think there's any direct Amazon Whole Foods direct competition. My guess is that this will get through.

On how the Federal Trade Commission responds: “There's an efficiency there but there are big questions about what does it all mean? There are some emerging competition issues here about how Amazon is delivering your life, (even) bringing your news. I just think there will be some curiosity here.”

“There’s a lot of liquidity in capital markets, a lot of money floating around. Whole Foods, which had a failed business model, is vulnerable to being gobbled up by companies with a successful business model a la Amazon.”

"Amazon’s announcement this morning that it had agreed to acquire Whole Foods Markets for around $14 billion is a transformative transaction, not just for food retail, but for retail in general.

"Implications ripple far beyond the food segment, where dominant players like Wal-Mart, Kroger, Costco, and Target now have to look over their shoulders at the Amazon train coming down the tracks, but also the potential for multi-channel, which Amazon up until now has largely eschewed."

FERNAND DE BOER, ANALYST AT PETERCAM IN AMSTERDAM, NETHERLANDS, WHICH HAS A BUY ON DUTCH GROCER AHOLD:

“This comes at a moment when the sector is very sensitive to bad news. You had the Kroger profit warning, and people are worried about the entrance of Lidl. So people are very nervous. And then they see this and they think – 'If online is going to kill offline, what am I doing in the sector? Sell.' Whether the reaction is exaggerated or not - it feels exaggerated. When sentiment settles a bit people are going to realize that Ahold can compete just fine.”

PHIL BAK, CEO OF ACSI FUNDS, ASSET MANAGER BASED IN ANN ARBOR, MICHIGAN, WHICH HAS HOLDINGS OF AMAZON AND WHOLE FOODS:

"There is really no limit to how far they (Amazon) can take Whole Foods. What Amazon has proven time and again is that they know how to connect the buying experience with what resonates with customers and with what customers will appreciate and want to continue to return to.

"Again we see Amazon leading, and other supermarkets following. How they plan to implement technology in the buying experience remains to be seen."

"I think it is surprising because it comes out the blue. But I think there is a lot of logic in the deal for both parties. I think for Amazon it gives a real foothold now in the food market which is what they have wanted for a very long time and which to do on their own to build up a substantial presence is very difficult. It gives them that opportunity to really grow their presence in grocery which is what they wanted to do all along."

"For Whole Foods it brings an opportunity to really increase operating discipline, to really try to digitalize the offer and to bring technology into stores to increase efficiency which is something they really need to do, because their sales margins are waning and there is an opportunity here for Amazon to bring its expertise and logistics and help them turn around their business.

"I think that Amazon has come to the rescue of a retailer in distress."

"Amazon's got its tentacles everywhere and that's another place to go. Amazon sees that industry changing significantly – and they see that people don't necessary go to the grocery store anymore."

"If a stock price goes down, like Whole Foods did, that's going to attract activist investors. The deal is not (valued at) the highest price Whole Foods has ever traded at, but it's going significantly above the lows. That illustrates the trend of activists helping to put a floor under stock prices. If the CEO can't get a stock price up, activists will come in to try and do it. That's a huge change from two decades ago. This will put more pressure on grocery stores, especially their CEOs."

“That was rumored, I totally dismissed it. Wow. Amazon can pour money into any investment and they don’t need to make money. Investors are used to them not making money. It is $13.7 billion but it is still small relative to the size of the whole company.

"It seems like a bit of an odd purchase because it is brick-and-mortar retail. On the other hand it gives them a distribution footprint to deliver goods in a short time frame. Perishable goods and food aren’t always the best when delivered by FedEx. Obviously canned goods are.

"It gives them a presence, the stores can be expanded to do other things. Amazon has talked about having a brick-and-mortar retail presence where perhaps people just go in to look at things.

"This could be part of that strategy – you take part of a Whole Foods Store and you add in Echo and all the other Amazon products. More and more we will see Amazon brand products as they work to create their own brand at retail.”