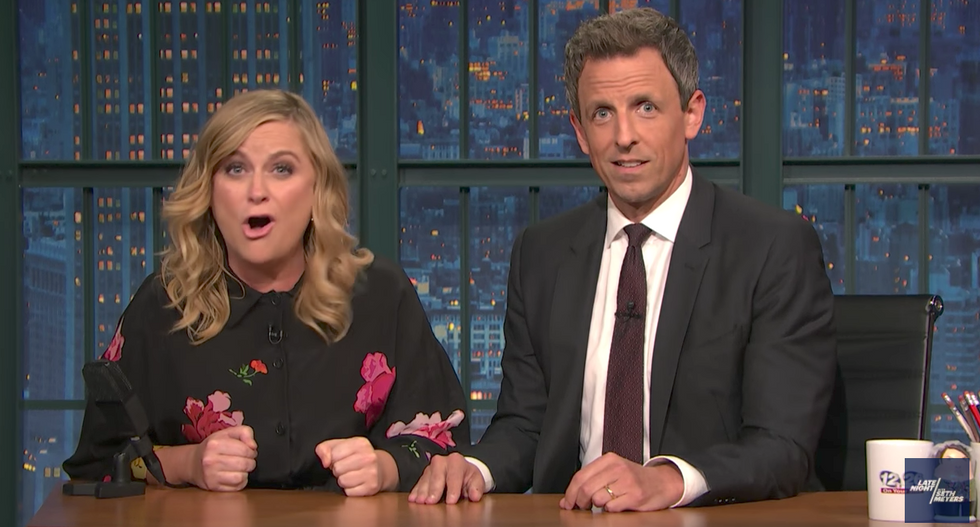 Twice this past week, a demonstrator has interrupted the Shakespeare production to protest the stage murder of a figure that physically resembles Donald Trump.

“Let me get this straight,” she continued. “You waited in line to get tickets to a play you already hated. And then you watched it for three hours. And then you ran on stage to protest, but not the president, someone who was dressed like the president, from getting pretend stabbed with a fake knife.”

“Really? I commend you; If you want to change this country, you just can’t sit around your house yelling at the TV, you have to get out there and yell at a play,” Poehler added.

Meyers pointed out that if anyone should be offended by the comparison between Trump and Caeser is Caeser, who was “beloved by the Roman Empire,” or, in other words, “won the popular vote.”

Meyers added you can tell the comparison between Trump and Caeser isn’t spot-on because in the case of Caeser, the “Senate stabbed him instead of just passing his sh*tty healthcare bill.”

Poehler argued all protestors are doing is “[making] a Shakespeare production entertaining” for the audience members who are “definitely buzzed on rose and this close to passing out.”

The pair later pointed out that liberals can’t get upset about protestors storming the stage at Shakespeare in the Park because “free speech isn’t about just protecting speech you like.”

“If you shut her down you give her power,” Meyers said. “And if you let her talk, you’ll find she’s much ado about nothing.”