Biographer who caught Trump lying 30 times: He tried to 'intimidate' me by lying about taping conversations 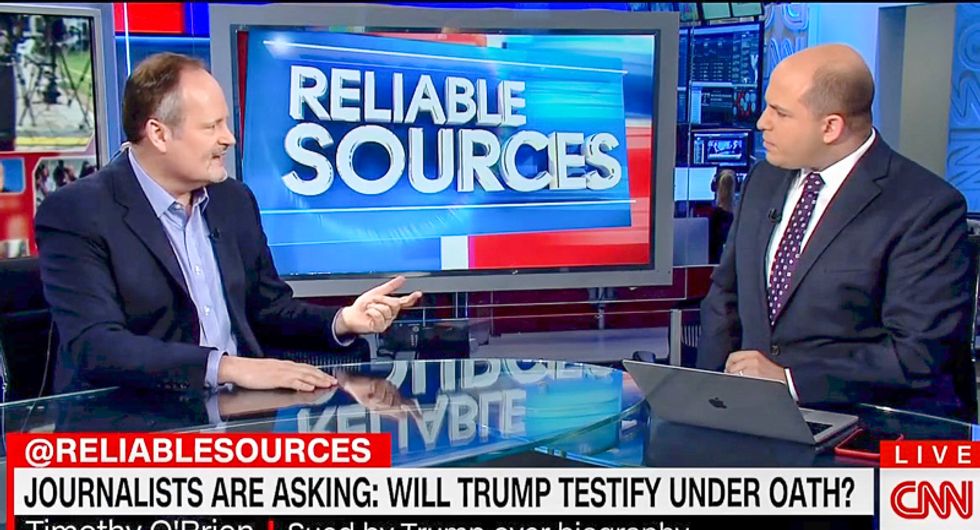 Biographer Tim O'Brien revealed on Sunday that now-President Donald Trump lied about taping him in an effort to intimidate him.

In 2005, Trump sued O'Brien over his book TrumpNation: The Art of Being the Donald, which suggested that the real estate mogul was worth only $250 million. But the author turned the tables on Trump and cornered him in a deposition for making at least 30 false statements.

"His loose association with the truth becomes problematic when he's confronted with documents," O'Brien explained to CNN host Brian Stelter on Sunday. "We've had decades now of Trump frequently lying or exaggerating about a wide range of things."

O'Brien pointed out that Special Counsel Robert Mueller has an arsenal of tools available to assist the Trump investigation, including subpoena power, access to financial records and a law enforcement community that is "deeply disturbed" by the direction of the presidency.

The the author also threw cold water on Trump's suggestion that he may have "tapes" of his conversation with former FBI Director James Comey.

"He's said this over the years to reporters when they go into the Trump organization, 'I just want to let you know that I'm taping you right now,'" O'Brien noted. "And he said it multiple times during my interviews with him. He said that into my own tape recorder when I recorded our interviews."

"But when he sat down for the deposition, my attorney said, 'Mr. Trump, do you have a taping system?'" he recalled. "And he said no. And [my attorney] said, 'Why did you say this to Mr. O'Brien.' And he essentially said, 'I wanted to intimidate him.'"